Speaking of Joe Sacco, there is a Sacco exhibition currently shown at Cartoonmuseum Basel until April 24. There is a lot to see there: the exhibition starts with original drawings from Sacco’s early comics, of which I found the juxtaposition of a “Zachary Mindbiscuit” story from 1987 and “More Women, More Children, More Quickly” from 1990 (both unpublished until the 2003 collection Notes From A Defeatist) the most interesting. While already an accomplished draughtsman in 1987, it wasn’t until “More Women…” that Sacco started positioning his caption boxes in oblique angles, which would become one of his trademarks.

Sacco’s main works, Palestine, Safe Area Goražde and Footnotes in Gaza, are all represented through original drawings (10 episodes from Palestine alone) as well. Another fascinating exhibit in this context is an arrangement of Sacco’s notebooks and reference photographs, next to the corresponding pages from the published comic. It becomes clear that while he gathered plenty of material, he took some liberties when it came to making a comic out of them – particularly in Footnotes, in which he re-imagines events that happened 50 years ago.

Insights into Sacco’s work process can be also gained from three short documentary films displayed on a screen (6 minutes in total), produced in 2011 by Portland Monthly and the Oregon Museum of Science and Industry: “Reporting from the field”, “Tools of the trade” and “Inspiration of Robert Crumb” (also available online). Another section of the exhibition traces the history of comics journalism before Sacco by way of “special artists” and reportage drawing from the 19th century on. 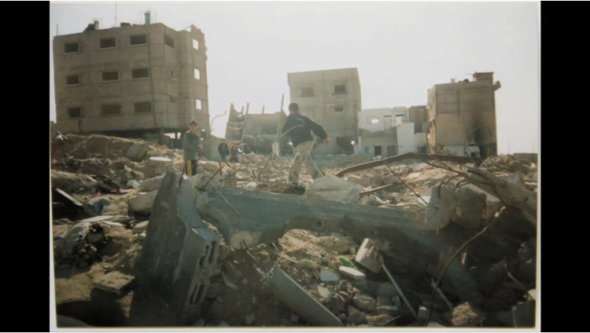 Reference photograph (still frame from “Reporting from the field”).

There is some more original art on display from Sacco’s more recent comics, which I’m not too crazy about. In the museum’s library, all of Sacco’s published works can be read in German and English. And then there’s another sensational exhibit: The Great War from 2013 (or 2014, according to the museum), in which Sacco tells the events of one day of a British military unit in WWI. The publication is subtitled An Illustrated Panorama, but I gather it comes in the form of a leporello (“accordion”) book. In the exhibition it is arranged in a semicircle. Not a comic, strictly speaking, but definitely an eye-catcher.

An exhibition view with Joe Sacco’s “The Great War” (photograph by Cartoonmuseum Basel).

In an exhibition leaflet, Sacco is quoted (my translation): “Journalism is about countering the endless lies, even though it sometimes reiterates them – intentionally or unintentionally.” In this regard, journalism and scholarship are very much alike.

Exhibition review: The Adventures of the Ligne claire, Basel

There is a lot to like about the exhibition The Adventures of the Ligne claire. The Herr G. & Co. Affair (German: “Die Abenteuer der Ligne claire. Der Fall Herr G. & Co.”), which can still be seen at Cartoonmuseum Basel until March 9, 2014. With a lot of original drawings and original editions, it shows what ligne claire (“clear line”) comics are and tells the story of the ligne claire style: from precursors such as Bringing Up Father and Bécassine, through Hergé and his contemporaries, to Joost Swarte coining the term “ligne claire” in 1977 and the ligne claire revival from the 1980s onwards.

The awesome exhibition poster by another contemporary artist, Exem.

There are only two things that the exhibition lacked:

Although some recent examples of ligne claire comics are exhibited (e.g. Christophe Badoux, Chris Ware), there is no mention of ligne claire webcomics – even though these exist, e.g. Tozo by David O’Connell, or The Rainbow Orchid (albeit that’s only an extensive preview to a printed comic) by Garen Ewing. The latter also interviewed the former once. It would have been interesting in the exhibition context to examine the clash of the new, online presentation format with the venerable drawing style.

My other minor complaint about the exhibition is that it mentions “André Franquin’s atom style” (or “atomic style”) as a comic style concurrent with ligne claire, without explaining what that atom style actually is. Some googling led me to Paul Gravett’s website, who has curated the exhibition In Search of the Atom Style in Brussels in 2009. He says, the atom style “seems to be less an artistic style to be adopted, and more an attitude, a state of mind, or as Swarte sees it, ‘… the taste for inventing things in a positive direction.'” – in other words, it’s more about which objects to depict, rather than how to depict them, thus similar to retro-futurism. Furthermore, the atom style appears to have been closely linked to the Marcinelle/Charleroi school (or is a revival thereof). “Atom style” (a term coined by Joost Swarte too) seems to be a difficult and vague stylistic designation at best, which makes it even more regrettable that the Basel exhibition uses it only offhandedly.

Two panels from the comic adaptation of Chico & Rita, by the “atom style” artist Javier Mariscal.