[This post was originally planned to be published in March in conjunction with Women’s History Month, but then I became ill and couldn’t finish it in time.]

Whenever comics scholars hear the word “grid”, they immediately think of comics. This is due to panels on a comic page often forming a grid-like layout. One of the field’s journals is even named The Comics Grid, which only shows how strong this perceived connection is. People outside of the comics world, however, might have a somewhat different idea of what a grid is. Take Rosalind E. Krauss, for instance. In 1979 she published an essay titled “Grids” (collected in The Originality of the Avant-Garde and Other Modernists Myths, Cambridge: MIT Press, 1986, pp. 11-22) and returned to the topic two years later in “The Originality of the Avant-Garde” (in the same book on pp. 151-170; the section on grids is on pp. 157-162). Here’s a quote from the latter (p. 158):

The absolute stasis of the grid, its lack of hierarchy, of center, of inflection, emphasizes not only its anti-referential character, but – more importantly – its hostility to narrative. This structure, impervious both to time and to incident, will not permit the projection of language into the domain of the visual, and the result is silence.

That doesn’t sound like comics at all, does it? Part of the problem might be, Krauss never defines what she means by “grid”. This would have been a good idea though, because even in mathematics there doesn’t seem to be a commonly agreed definition.¹ From the examples pictured in her essay, it looks like she means two different types of grid images: one in which a grid is formed by sets of drawn (or painted, etc.) parallel lines (e.g. Agnes Martin’s paintings), and another in which these lines are only implicitly formed by the borders of rectangles (e.g. Jasper Johns’s Gray Numbers, to which we’ll get back later in this post).

Both types can be found in comics, too. The former is the more common layout. However, the following example might look unusual at first: 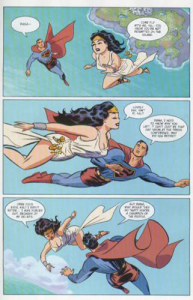 a page from Darwyn Cooke’s DC: The New Frontier, vol. 2

This is a 1×3 panel layout alright, the dominant layout in The New Frontier. It only becomes a grid, though, if you allow the white page borders to form grid lines too, along with the two proper gutters between the panels (even though their widths are different): 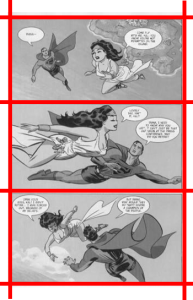 More on this layout in a minute.

For the second type of grid, the one with the implicit lines, consider this example: 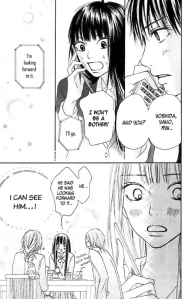 There are 5 panels, but no gutters: the 3 panels of the upper row are divided by black borders (whereas the 2 in the lower row don’t have any border between them), but as we can see from the white strip on the right hand side of the page, the page background is white, not black, so there’s no page background visible between the panels and thus there are no proper gutters. What makes it furthermore difficult to discern the grid are the bleeds to the top, left, and bottom of the page. Still, this page can essentially be regarded as a 2×3 panel layout (with the 4th panel² overlapping into the 5th, and the 5th panel spanning two columns): 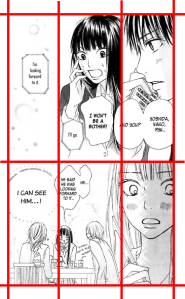 Once you start paying attention to these things, the variety of Karuho Shiina’s layouts is amazing. It would be fun to see how many pages into Kimi ni Todoke a page layout is repeated for the first time, but I’ll leave this exercise for another time.

Krauss doesn’t expressly distinguish implicit and explicit grids, but she makes another interesting distinction: centrifugal vs. centripetal.³ A centrifugal reading of a work of art assumes that “the grid extends, in all directions, to infinity” (p. 18). The image is “a tiny piece arbitrarily cropped from an infinitely larger fabric”, thus “compelling our acknowledgement of a world beyond the frame”. A centripetal work of art, on the other hand, is “an autonomous, organic whole” (p. 19).

From the examples discussed by Krauss, it looks like this distinction is simply a question of cropping: if the grid lines end where the image ends, it’s a centrifugal image. If the grid lines end within the image borders (so that they’re strictly speaking only line segments, not lines proper), it’s a centripetal image. If we want to apply this categorisation to comics, we have to once more be careful not to confuse panel borders with gutters. On Cooke’s New Frontier page, all panel borders are visible, but the imaginary rectangles that continue the grid in all four directions beyond the three panel rectangles are not. Therefore, we cannot say that the gutters (which form our grid here) end at certain points, e.g. the page borders. Thus this page is a centrifugal image. With Shiina’s Kimi ni Todoke page it’s not so easy to tell: here, the white page background on the right acts as a delimiter of the (implicit) grid rays, which exit the page only to the top, left, and bottom. To visualise this view on the page, I coloured each of the 5 panels and the page border differently: 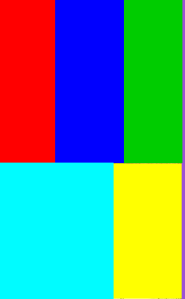 Perhaps the overall character of this page is still centrifugal, but not quite as much so as in the New Frontier example.

One final remark about the purported “hostility to narrative” of the grid: I think Krauss proves herself wrong by picturing Jasper Johns’s Gray Numbers. In this painting, each rectangle of the grid (except for the top left one) is filled with a numeral between 0 and 9. Let’s look at a random rectangle, say, the middle one in the bottom row. It’s a 4. The rectangle above it is a 3. The one on the left is also a 3. On the right there’s a 5, and next to the 5 there’s a 6… You get the idea. Obviously, there is a pattern here. From the top left to the bottom right corner, the numerals form a sequence – either horizontally or vertically – in which the number is increased by 1 until it is reset to 0 when it would otherwise reach 10. My point is: it matters little what’s inside the rectangles, because we have a tendency to see grids as sequences. And (while the precise meaning may be a matter of debate) a meaningful sequence at that – which amounts to, for all intents and purposes, a narrative. Only completely empty or uniform grids (e.g., again, Agnes Martin’s) resist this reading as a narrative.

All that being said, it should be noted that none of it is really the point of Krauss’s essays, which are more concerned with the grid as a typical form of modernist painting within the discourse of originality and repetition.

¹ See e.g. the keyword “grid” at Wolfram MathWorld and the article “Regular grid” at Wikipedia.
² The reading order is right to left here, so the 4th panel is the bottom right one and the 5th panel the bottom left one.
³ More precisely, Krauss acknowledges that this discourse predates her essay. She cites John Elderfield, “Grids”, Artforum X (May 1972), 52-59.