The best manga of 2016? Review of Yotsuba&! and Kimi ni todoke

2016? Yes, that’s right, we’re still not finished with that year. This time we’re going to look at some ‘problematic’ middle volumes of long-running manga series: how come first volumes and, on rare occasions, final volumes get all the media attention while all the volumes in between get none? If I remember correctly, Kiyohiko Azuma’s Yotsuba&! vol. 13 was included on only one best-of-2016 list and consequently didn’t make the master list, while Karuho Shiina’s Kimi ni todoke volumes 23 and 24 were not nominated at all but ranked among the best-selling shōjo manga of 2015 in Japan. Wouldn’t it be possible for a manga series to start out strong and then get even better in the course of the series, as its creator ‘finds his/her groove’?

Of course, this kind of progress is a rare thing. Most manga series are on a more or less steady downward slope, their creators eventually running out of ideas but still milking the proverbial cow until the readers’ loyalty is exhausted and the series cancelled. Another reason for ignoring middle volumes is that reviews of them work differently regarding their purpose as reading recommendations; typically, potential readers want to know whether the first volume is worth reading, and when they read it they make up their own minds about proceeding to the next volume. Still, some middle volumes stand out from the rest, some are good jumping-on points, and some are nothing special but keep up the high quality of a series and are simply better than most other manga volumes of the year, and consequently deserve a spot on a best-of list. So let’s talk more about middle volumes. 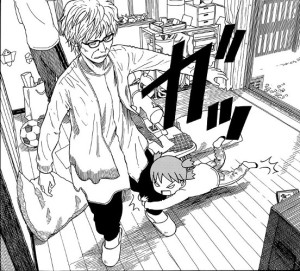 Previously in Yotsuba&!: Yotsuba is a five year old girl living with her single father.

Some people say each Yotsuba&! chapter is self-contained and they can be read in any order, but then you would lose track of the ever-growing cast (the neighbours’ daughters, their respective friends, and so on) and not get the references to earlier episodes, such as the camping trip in the previous volume.

This 13th volume is remarkable due to several unusual things: 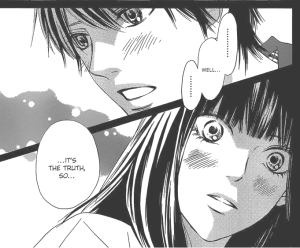 Previously in Kimi ni todoke: Sawako and her best friends Yano and Yoshida have at last found boyfriends, but as they enter their final year of high school, the threat of separation due to different university and career choices looms over all of them.

The last two volumes focused on Yano and Yoshida, but in vol. 24 we’re more or less back on track as the actual protagonist Sawako is once more at the center of the story. Sawako realises she wants to go away for university, but she is afraid of admitting that to her boyfriend. And that is, basically, what happens in this volume.

When re-reading the entire series up to this volume, I was surprised how fast-paced the first 2-3 volumes seem, and how glacial the pace has become now. As noted before, Karuho Shiina largely avoids the danger of repetition inherent in a ‘talking heads’ type of story by employing ever-changing page layouts. On the other hand, sometimes the character proportions are still slightly off, and I can’t help but feel that a little sloppiness has crept into the art. As strong as the manga series is overall, at this point it has been manoeuvred into somewhat of a trough, and it remains to be seen if it rebounds for the final six volumes.

One Comment on “The best manga of 2016? Review of Yotsuba&! and Kimi ni todoke”