← The best manga of 2016? Review of To Your Eternity
Review, Jirō Taniguchi memorial edition: The Millennium Forest →

In my blogpost on the 2019 Venice Biennale, I mentioned that Darren Bader had set up a comic book vending machine there, which however failed to dispense a copy for me. In the meantime, the artist and his gallery have kindly provided me with some copies of the comic book in question: Scott Mendes’s Venice (or is it “Scott Vendes’s Menice”?).

There are two ways to approach this item. On the one hand, it is part of a work of installation / conceptual art, which in turn is part of Bader’s oeuvre. One could now try to decipher all the references in it – the name-dropping ranges from ancient saints to contemporary artists and other celebrities – and make connections to Bader’s artistic strategy to see how the comic fits into the larger picture. On the other hand, one could simply regard this comic book as a comic book and see if we can get anything out of reading it. In other words: as a comic, is it any good?

First, the facts: while it is a standard staple-bound US format comic book, it is rather long at 32 pages without advertisements (except for two probably fake ones on the inner covers). The writing is credited to “Moses Hosiery” (which may or may not be an alias for Bader himself) and the artwork to two design companies, Suite Sixsixteen and Oliven Studio. By and large, the artwork is of a high quality: the linework is detailed but without any shading, which is made up for by the nuanced colouring. The colouring, however, shows a propensity for garish contrasts which at first glance lend a deceptively cheap appearance to the whole art. 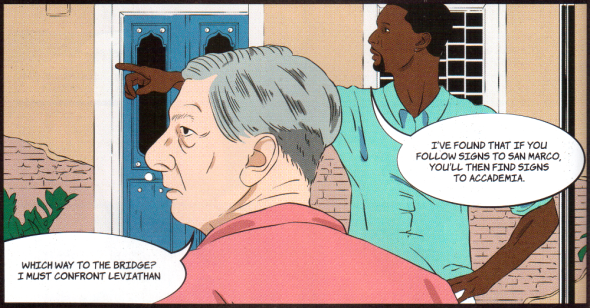 The story is of a ‘dream within a dream’ variety which allows for a surreal plot, as the cover already suggests. The protagonist is modernist painter Giorgio de Chirico who somehow happens to live in present-day Venice. He’s clearly not having a good day: after getting up he falls down the stairs, then gets washed out onto the street by some sort of flood wave, and in the end he even gets swallowed by the pavement. And these aren’t even the weirdest events in the story. Like I said, this is a dream in which strange things happen. Adding to the confusion is the number of languages in which the dialogue is written: English, Italian, French, Portuguese, and Hebrew.

Depending on your taste, you may find this comic either unnerving or fascinating. It’s definitely something different than e.g. the latest issue of X-Men. And despite its surrealism, it portrays a Venice that readers who have ever been there will instantly recognise with all its water, pigeons, seagulls, and tourists from all over the world.

If you’re interested in obtaining a copy of this comic book, perhaps it’s worth trying to contact Galleria Franco Noero to see if they still have any left.