Here’s one more brief review of a current comic in which music is represented.

The music: In this Hellblazer story (“The Good Old Days”), John Constantine’s ex-girlfriend Margaret Ames is possessed by the soul of a criminal that has escaped from hell. John tries to magically locate Margaret through an object, a t-shirt that she had worn. It is a band shirt from John’s old band, Mucous Membrane, and this shirt is the only representation of music in those three issues. But it works remarkably well: not much is disclosed about Mucous Membrane (the members of which were last featured in Hellblazer a couple of issues earlier) except that they hadn’t been particularly successful, as evidenced by John having had “fifty of [these shirts] sitting in a moldy box” and having stayed at “rot holes” at that time. But from our knowledge of John’s background as an angry punk in late 70s England, and from their name, we get a pretty good idea of what their music must have sounded like. Interestingly, the band logo looks slightly different in each issue, event though it’s supposed to be the same shirt and it’s the same art team on all three issues… 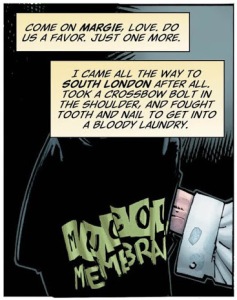 The rest: It is a sick joke that DC cancelled Hellblazer just in time for its 30th anniversary special. But the writing had been on the wall for some time. While Tim Seeley (and his predecessor, Simon Oliver) nailed the dialogue more often than not, DC assigned a string of artists to this book who were mediocre at first and then gradually became worse. Which makes me wonder why they bothered to “rebirth” Hellblazer in the first place.