What about that feminist agenda? Review of Mockingbird #8 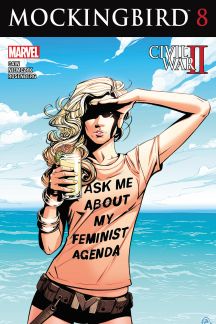 “ASK ME ABOUT MY FEMINIST AGENDA”? That’s just what we’re going to do now: does Bobbi Morse a.k.a. Mockingbird have a feminist agenda? The short answer is, there would be no reason to wear that t-shirt if she didn’t. For the long answer, there are four key scenes with regard to feminism that merit a closer look:

In that same epilogue text, Cain describes Bobbi as “separate from the male gaze, but still not afraid to bask in it” – and there is indeed some basking going on in this comic, though not as much as in others. All things considered, while Bobbi may not have an explicit, discernible feminist agenda in Mockingbird #8, there are much more subtle and not-so-subtle feminist undertones in this comic than in most other mainstream superhero comics.

That alone makes Mockingbird #8 an outstanding comic book, but it’s also beautifully drawn (and coloured), has some genuinely funny moments, and many fresh and wacky ideas. Ultimately Mockingbird proved too over-the-top for either the readers or the editorial management of Marvel, but I hope this won’t be the last we get to see of Cain and Niemczyk.

No rating today because the reviewed item is so short, but here are two other reviews I found interesting: Major Spoilers Podcast #702 and The Marvel Report.