Remember the conference paper I announced on this weblog in 2012? It took some time, but now this paper has been published as an article in Studies in Visual Arts and Communication – an international journal and is available online for free: http://journalonarts.org/wp-content/uploads/2015/01/SVACij-Vol1_No2_2014-delaIGLESIA_Martin-Presence_in_comics.pdf

The term ‘presence’ is often used to denote a trait of an artwork that causes the feeling in a viewer  that a depicted figure is a living being that is really there, although the viewer is aware that this is not actually the case. So far, scholars who have used this term have not explicitly provided criteria for the assessment of the degree of presence in a work of art. However, such criteria are implicitly contained in a number of theoretical texts. Three important criteria for presence appear to be:
1. size – the larger a figure is depicted, the more likely this artwork will instil a feeling of presence.
2. deixis – the more the work is deictically orientated towards the beholder, e.g. if figures seem to look or point at the beholder, the higher the degree of presence.
3. obtrusiveness of medium – if there is a clash of different diegetic levels within an artwork, the degree of presence is reduced.

These criteria can be readily applied to a single image like a painting or a photograph. A comic, however, consists of multiple images, and the presence of each panel is influenced by the panels that surround it by means of contrast and progression. Another typical feature of comics is written text: speech bubbles, captions etc. do not co-exist with the drawings on the same diegetic level, thus betraying the mediality of their panels and reducing their degree of presence. A comic that makes striking use of effects of presence, which makes it a suitable example here, is the superhero series The Ultimates by Mark Millar and Bryan Hitch (Marvel 2002 – 2004). The characters in this comic are often placed on splash pages and/or seemingly address the reader, resulting in a considerable experience of presence. 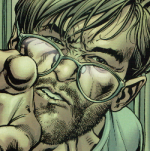 I’m going to present a paper at the conference Presence and Agency: Rhetoric, Aesthetics and the Experience of Art, which takes place in Leiden from Thursday to Saturday this week. Here’s a very short abstract for my talk:

Presence is the feeling in a viewer that a depicted figure is a living being that is really there. Theoretical literature suggests that the size of the figures and their deictical orientation are the most important factors of presence in single images. Comics, however, consist of a sequence of images, so the degree of presence in a comic panel is influenced by its surrounding panels, either by means of contrast or progression. Another typical feature of comics is written text, which betrays their mediality and consequently decreases presence. The example used here is the superhero comic The Ultimates (Marvel, 2002-2004).

I’ll post further information about this paper and its publication by and by.