This time, we’re going to look at a theoretical concept which is not specific to art history: heterotopias, or “other spaces”, described by philosopher Michel Foucault in a talk in the 1960s which was published in the 1980s. He defines heterotopias as “something like counter-sites […] in which the real sites, all the other real sites that can be found within the culture, are simultaneously represented, contested, and inverted.” Foucault then lists six “principles” to further characterise heterotopias:

These “principles” are not meant to be necessary characteristics of heterotopias, i.e. a space doesn’t need to fulfil all six principles to be regarded as a heterotopia. This rather vague definition means we can apply the term heterotopia to many different spaces. In art history, we mainly deal with two kinds of spaces: real spaces in which art is produced and received, and imaginary spaces conveyed by the content of works of art. For the former, see e.g. Ruth Reiche’s recent blog post (in German) on cinemas and museums as heterotopias. I’m going to look at the latter now, and try to find out what is to be gained when we conceive a space in a comic as a heterotopia.

The sequence I have selected for this purpose is from an episode of the manga classic 子連れ狼 / Kozure Ōkami (Lone Wolf and Cub) by Kazuo Koike and Gōseki Kojima, titled “Pitiful Osue” in the US edition (issue #2 in the First Comics series from 1987). On the first 19 (of 56) pages, we only see the infant Ogami Daigorō, the “cub”, but no trace of his father Ogami Ittō, the “lone wolf”. Then suddenly, starting with p. 20, the page background turns black for five pages. A caption text tells us we’re “elsewhere” now, and we witness Ogami (Ittō) fighting against animal-headed demons amidst swirling fumes. Is this new setting a heterotopia?

The basic definition, a counter-site which represents and inverts real sites, might be applicable: in this hell (Ogami himself uses this term later), the twisting, naked bodies are representations of the people on earth. Ogami seems unchanged at first, but then his sword breaks in the fight – something which probably never happens to him in “real” life – and he doesn’t overcome his enemies. Some of Foucault’s six principles also hold true for this hellish place:

So what do we make of this dream/hell now that we’ve identified it as a heterotopia? Above all other characteristics, heterotopias are radically different from real places, and this “otherness” might be the key to understanding the role of the dream sequence in the story: it marks a harsh change of perspective from Daigorō to his father, who are for once far apart from each other in the beginning of this episode. By shifting from the real world to the heterotopian underworld, the authors emphasise that father and son are “worlds apart”. In the course of the episode, they will have to find each other again, so that the order at the basis of Kozure Ōkami – the companionship of “wolf” and “cub” – is restored.

In his essay “Perspective as Symbolic Form” (“Die Perspektive als ‘symbolische Form'”, 1927), Erwin Panofsky dispels the myth that artists didn’t know anything about perspectival construction before the Renaissance. He shows that the Ancient Greeks and Romans just employed a different system than the vanishing point system we are used to today, and neither can be said to be more “correct” than the other. For Panofsky, the transition from the old to the new system was a paradigm shift. As long as a perspectival paradigm is upheld, artists will construct their pictures in that system. Once a paradigm shift occurs, there is no turning back to the old system – artists don’t choose between different systems.

If we follow Panofsky so far, one question remains: is the vanishing point system still the uncontested paradigm today, or has another shift occurred in the last 85 years? Let’s look at a random comic book to see how perspective is handled there. It’s been a while since I last reviewed Astonishing X-Men, and I’m going to properly review the current issues in a later post, but for today I pick issue #57 from December 2012 (cover dated February 2013). With this issue, Gabriel Hernandez Walta took over as the regular artist from Mike Perkins. It is a harsh transition, as their art styles are so different: none of the lines in Hernandez Walta’s art are exactly straight; they are all slighty irregular and seem nervous, vibrant and sketchy. And yet, see how he constructs perspective in the first panel on the second page: 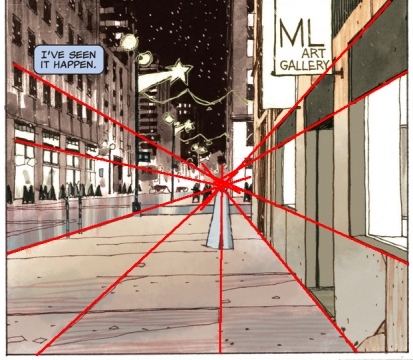 If we trace the lines indicated by rows of windows or sidewalk seams (traced in red by myself here), which would be parallel to each other in real three-dimensional space, they converge in a single vanishing point when Hernandez Walta projects them onto the two-dimensional space of his panel. Furthermore, this vanishing point is at the same location in the picture as the head of the character Warbird, the protagonist of this story.

This comic book is full of such obtrusively constructed vanishing point perspectives, often including floor tiles or other grid patterns that help to convey a feeling of depth. However, this is not the only perspectival system employed by Hernandez Walta. In several panels, he switches to isometric projection. For instance, in the third panel on p. 3: 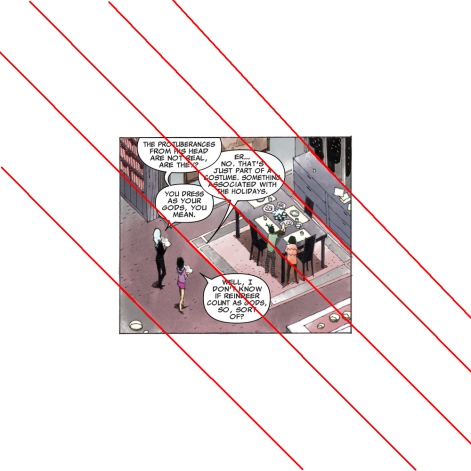 Parallel lines formed by the furniture in the depicted room (assuming the furniture is meant to be rectangular and arranged in parallel) stay parallel in the projection – they never converge even if we extend them beyond the panel borders.

Overall, the predominant perspectival construction system in Astonishing X-Men #57 is still the vanishing point system. But maybe Hernandez Walta’s little isometric deviations are a sign that the vanishing point paradigm isn’t quite as uncontested nowadays as it used to be.