Review: When Manga Came to America 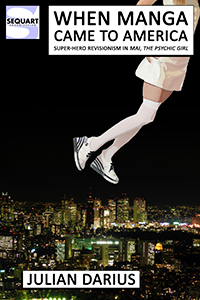 Title: When Manga Came to America. Super-Hero Revisionism in Mai, The Psychic Girl

When I first heard about this book, I was looking forward to it (even though most of it had been published before as a series of blog posts), because it seemed to be about roughly the same topic as my PhD research project, or at least some aspects of it. The more other people write about it, the less I still need to write. However, When Manga Came to America turned out to be of not very much use to me, and I doubt it’s of much use to scholarly research in general.

Darius’s book is divided into three chapters, plus an Introduction (pp. 1-11). The very first sentence of this introduction is already telling: “In early 1987, Eclipse introduced American comics readers to manga with three translated series” (p. 1). This sentence tells us that the book isn’t really about the manga Mai by Kazuya Kudō and Ryōichi Ikegami per se, but rather about its American edition. Granted, the title of the book is When Manga Came to America, but it is striking that Darius doesn’t say anything at all about the original Japanese publication – even though sometimes he really should, e.g. when he critisises the narrative structure of the comic on p. 7 (which may be better explained by its original serialised magazine publication than by the three ‘acts’ Darius has made up), when he compares it to other comics published in the US at the same time on p. 41 (instead of comparing it to other manga originally created at the same time), when he talks about Mai as an example of an “extended finite” comic book series on p. 49 (thus again ignoring its original publication format), or when he says that a dialogue “simply feels off” on p. 53 (without mentioning that it’s only a translation).

It’s also noteworthy that Darius says “American comics readers” in that first sentence. Rather than considering the reception of Mai among Americans in general, including those who haven’t read comics before, Darius imagines a specific type of reader who is familiar with superhero comic books and who sees Mai in this context. (It should be noted that Darius doesn’t talk about the actual reception history of Mai – i.e. no empirical evidence is presented, such as contemporary reviews or interviews -, and probably not even his personal reception as he was only 10 years old when Mai first came out in May 1987. Instead, he speculates about what the reading experience must have been like at that time.)

The first two chapters must be read with this particular angle in mind. In the chapter “The Depiction of Super-Powers in Mai, the Psychic Girl” (pp. 12-40), Darius offers a lengthy summary of the plot of the series with an emphasis on its supernatural, psychic elements in comparison to superpowers in standard American superhero comic books. While doing so, Darius dishes out his subjective, ungrounded opinions, e.g. “there’s no doubt that the third act is rushed” (p. 30).

The second chapter, “Mai, the Psychic Girl and Revisionism” (pp. 41-49), is much shorter and examines Mai in the context of superhero comics of the late 80s, above all Alan Moore’s Marvelman/Miracleman. Again, I find this comparison somewhat pointless without considering the original publication, as the American readers must have been well aware that Mai was a Japanese comic. Darius makes quite a bold statement again when he says, “Mai was published in English at the height of the revisionism, and it couldn’t help but be understood in this context, even if this wasn’t the context in which Mai had been created in Japan” (p. 41).

In the third chapter, “Sexuality in Mai, the Psychic Girl” (pp. 50-66), Darius thankfully does away with the superhero comparisons. He identifies several scenes with nudity or other sexual content and comes to the conclusion that Mai, even though it “is pretty restrained” (p. 63), is really “a story of sexual self-discovery” (p. 65), and “a story in which this [Mai’s psychic abilities] is linked to sexual maturity” (p. 58). This looks to me as if Darius misses the mark and over-interprets the story in a desperate attempt to make sense of the occasional suggestive imagery (which definitely feels out of place in this comic). The question is indeed “whether Mai is entirely of good taste” (p. 63). This chapter gets more awkward the further Darius digresses from the comic, saying things like “breasts, in particular, are a traditional symbol of nature’s bounty” (p. 61), or “healthy male brains often find girls attractive at around the age that girls become capable of reproduction” (p. 62). (Why male, by the way? What about female readers?) This excursus on paedophilia, by the way, contains the only footnote reference in the whole book. I’m not saying a text without formal literature references can’t have any scholarly merit, but it is certainly indicative.

It’s not as if When Manga Came to America wasn’t worth your time or your money, as it is both short and affordable. The reason why I’m reviewing it at all is connected to a larger issue within Comics Studies, as well as within Humanities as a whole: there is a widespread attitude that a researcher may choose which secondary literature to read and cite, and which to ignore – unlike in the Sciences, where it is usually clear which literature needs to be cited in a text on a specific topic. I’ve always felt the Humanities could and should do better in this regard. Therefore, I’d like to suggest how to deal with Darius’s book in a scholarly context, because it is a piece of secondary literature that isn’t easily defined as either a scholarly book or a journalistic review. Its merits notwithstanding, in my opinion, this book may be safely ignored in scholarly discourse, at least as a secondary source alongside proper scholarly texts. Of course, the author probably never intended it as a contribution to scholarly discourse in the first place. And who knows, When Manga Came to America may still serve as an entertaining book for fans who can’t stop thinking about Mai, the Psychic Girl, and who appreciate the opinions of another well-read fan.