Roland Barthes’s Rhetoric of the Image – in comics?

Already in 1964, Roland Barthes (1915-1980) published one of his best-known essays, ‘Rhétorique de l’image’¹. It is also a text that’s quite difficult to understand. Here’s what I make of it: according to Barthes, any image (except for those created by “illiterate societies”, e.g. ancient cultures) contains three messages, the linguistic, the literal (or denoted), and the symbolic (or connoted, or cultural). It should be noted that Barthes deviates from traditional communication theory by using the term ‘message’ without necessarily tying it to a sender: “the language of the image is not merely the totality of utterances emitted (for example at the level of the combiner of the signs or creator of the message), it is also the totality of utterances received: the language must include the ‘surprises’ of meaning.” Anyway, let’s look at these three messages in detail:

The linguistic message can be found “in, under, or around the image”. Such textual matter is always there, says Barthes (although I can image at least one kind of image where text may be completely absent). This linguistic message may have either (or both) of two functions: anchorage and relay. Anchorage means, the text clarifies or “fixes” the meaning of the image, which is always polysemous, by choosing some of the possible signifieds and “banishing” others. The relay function is less common and puts the text in a “complementary relationship” with the image – Barthes explicitly mentions comic strip dialogues as an example.²

The literal or denoted message consists of the objects depicted in the image, stripped of all symbolic meaning. It conveys nothing but a consciousness of the “being-there” of the represented things. (Barthes is particularly concerned with photography here, which additionally implies “an awareness of […] having-been-there” and a tension between “spatial immediacy and temporal anteriority”.) According to Barthes, little more than “anthropological knowledge” is required to recognise the objects in the image on this level, although I doubt it’s always as easy as that.

Finally, the symbolic message contains the signifieds (or ‘meanings’, colloquially speaking) of the image. In contrast to the literal message, more specialised kinds of knowledge may be required to decipher this message, but different “readings” of the same image are still legitimate. The totality of signifiers in an image, by the way, is what Barthes calls the eponymous ‘rhetoric’. It’s also noteworthy that Barthes seems to think that in some instances (e.g. advertisement photography, his principal example) we may even realise signifieds invested by the sender/creator of the image, i.e. recognise the creator’s intention (and there we have the good old sender-message-recipient model again).

Let’s see if we can read a panel from a comic in this way. 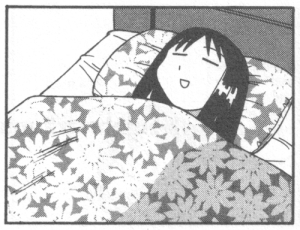 This is the first panel of one of my favourite Azumanga Daioh (あずまんが大王) strips, by Kiyohiko Azuma. On the literal level, we can identify all the objects depicted: the face of Osaka (one of the main characters), her hair and part of her neck, and a bed with its various components. We are also able to tell the flower pattern on the blanket apart from ‘real’ flowers-as-objects. I think we’re still within the realm of the denoted message when we say: this is a sleeping girl.

Before we tackle the symbolic message (even though literal and symbolic message are perceived simultaneously, says Barthes), let’s look at the linguistic message. There is no writing in this panel, but in this case, Barthes is right when he says there’s always some writing nearby. Consider the complete four-panel strip (from the German edition published by Tokyopop):

There is a heading above the panel and a speech bubble in the fourth panel. The heading reads “Osaka’s New Year’s dream” and tells us that rather than just watching Osaka sleep, we are about to learn what she’s dreaming of. The speech bubble says, “Chiyo, how come you’re able to fly?” Now we need to recall the knowledge of writing that is located even further away from our panel: in previous episodes, Osaka already had weird ideas about the character Chiyo and her plaits. With this knowledge in mind, we can almost guess Osaka’s dream (and indeed, in the next strip we see how Chiyo’s flapping bunches enable her to fly in Osaka’s dream). I’d say this is an example of anchorage: without the writing, the meaning of the image would be unclear.

As for the symbolic message, we need to take into account once more previous episodes, which established Osaka as a slow character who often has wondrous or naive thoughts. This strip is not funny because of the absurd idea of a flying girl – after all, such illogical ideas are common in everyone’s dreams – but because it’s such a typical thing for Osaka to think, no matter whether she’s asleep or awake. The symbolic message may well be to invoke Osaka’s characteristics in order to convey humour. In the last panel, the invoked characteristic are her weird ideas, but in the first panel, which is repeated twice almost unchanged, it’s probably Osaka’s slowness. When in a later episode the livelier character Tomo is shown dreaming her own “New Year’s dream”, one panel of her sleeping in bed is enough to indicate that the following panels show her dream.

So that was, if I got it right, a basic application of Barthes’s theory to a comic panel. A more interesting example would be a panel in which literal message and symbolic message are at odds with each other, or in which the linguistic message acts as relay rather than anchorage. I’m sure there are plenty of such examples once one starts looking.

This post took me much longer to write, as I found making a connection to comics with this one is somewhat trickier. Jan Assmann is an egyptologist, and his book Das kulturelle Gedächtnis (“cultural memory”)¹ is concerned with entire ancient cultures – Egypt, Greece, Israel – and they way in which each of them formed and maintained a distinctive collective memory. In order to apply Assmann’s theory to comics, we could look if comics can be said to constitute a culture, or several cultures, of their own (e.g. Matthew J. Pustz’s “comic book culture”²), and analyse how such a comic culture differs from others in terms of its “connective structure”.

Another approach would be to investigate how the content of a particular comic relates to a cultural memory, which is what Karin Kukkonen has done for the case of Bill Willingham’s Fables.³ Similarly, but with less emphasis on Assmann, Marianne Hirsch has examined Art Spiegelman’s Maus in relation to Holocaust remembrance.⁴

There’s another aspect in Assmann’s book that I find more interesting though. Cultural memory is primarily based on writing, which developed out of rites. A rite is a “mimetic routine” that has a symbolic meaning beyond its mere functional meaning. All rites are situated on a scale between repetition on the one hand, and realisation or revival of a past event (“Vergegenwärtigung”) on the other. The less strictly a rite adheres to a form, the more vivid is the reference to the past.

Given the sequentiality of comics, it’s not hard to find instances of mimetic routines in them. It then takes a closer look to tell the functional routines apart from the symbolic routines, but that is still feasible. For instance, consider the sequence of Jim Davis’s Garfield epsiodes from May 10 – 14, 1993. All five of these strips are about Garfield shedding his hair. Only in three of them (May 10, 12 and 13), however, he is actively moving to intensify the shedding, whereas in the other two he is motionless. Garfield’s shedding motions therefore constitute a mimetic routine (if we assume that these Garfield strips are connected to one long story in which the events of the episodes occur one after another). Furthermore, it isn’t a functional routine, as Garfield’s motive is certainly not merely the advancement of his change of pelage. Rather, the motive is mischief towards Jon (May 10 and 12) and competition against Odie (May 13). 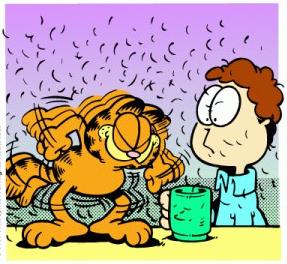 These motivations can only be conveyed if we interpret Garfield’s actions as neither indexical nor iconic signs, but symbolic ones. (The hairs already shed might pass as an indexical sign, but they are not part of the mimetic routine.) Each time, the shedding motion conveys a message that can only be deciphered through its context: Garfield giving a Greek gift (May 10), Garfield claiming his superiority over Jon (May 12) and Garfield claiming his superiority over Odie (May 13). As these mimetic routines have symbolic functions, they must be rites according to Assmann.

The problematic part of Assmann’s notion of rites is the emphasis he puts on their purported reference to past events. This may be true for the religious rites discussed in Assmann’s book, but which event does Garfield’s shedding ritual refer to? This rite can well be regarded as an extension of a cat’s natural change of pelage, but that is a recurring, annual event, not a singular one such as the Exodus of the Israelites from Egypt. For the kind of rite meant by Assmann, it is essential that it refers to an event that is long gone and unlikely to return, so that it has to be remembered through rites (or writing) within an “extended situation” (“zerdehnte Situation”). If we add this requirement to Assmann’s definition of rites, they are much rarer in comics than mere mimetic routines. 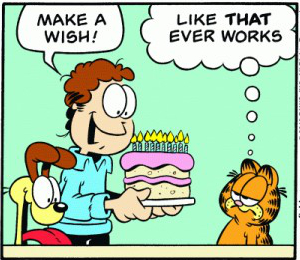 In Garfield and other comics, there are examples of rites more in line with Assmann’s sense: rites connected to festivities such as Christmas, New Year’s Eve, or Garfield’s birthday. Which past events do these rites refer to? Maybe Christmas rites most likely refer to the birth of Jesus, New Year’s rites to the past year, and the rites of Garfield’s birthday to the birth of Garfield? But when we look at such a rite, e.g. Jon giving a birthday cake to Garfield (usually on June 19, the publication date of the first Garfield strip ever), it’s hard to see any connection to a past event in that. Surely anthropologists could explain how the cake-giving rite originated and how it is connected to childbirth, but that connection just isn’t conveyed in the rite itself. In contrast, Assmann’s examples, such as the reading of the Haggadah at the Passover Seder, directly refer to past events.

Therefore, I think this trait of rites should be considered part of their definition: a rite

Such rites, however, aren’t easy to find, in comics and elsewhere.