Continuing the ‘tradition’ from last year, here are some more reviews of relatively recent creepy manga: 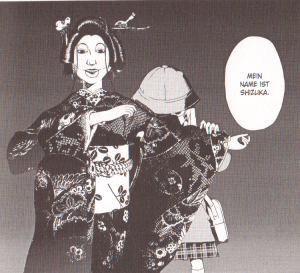 In a remote Japanese village, a mysterious epidemic breaks out. One by one, several villagers become anaemic and then die. The local doctor, Ozaki, resolves to find out the cause of the supposed disease.

What starts promisingly as a suspenseful medical thriller soon (in vol. 3 at the latest) turns into a generic vampire story if there ever was one. It turns out that the family who recently moved into a castle-like mansion near the village are vampires who suck the blood of the villagers and turn them into vampires too. Part of vol. 4 is even told from a villager-turned-vampire’s perspective and leaves no doubt about what they are.

That being said, this manga has some things going for it: on the one hand, it manages to keep up some of the suspense even after the vampires have been clearly established as the cause of the deaths. Plus, the art style is truly distinctive – characters are elongated and twisted, faces become fine-lined caricatures, stark contrasts are employed and inverted again. In some instances Fujisaki relies too much on photo-referencing though, resulting in overly flat compositions.

In any case I don’t think I’ll read the remaining 7 volumes anytime soon.

Scariest moment in vol. 4: the little vampire girl with the puppet.

Detective Ritual is more of a mystery than a horror manga, but it’s sufficiently creepy to be included in this Halloween-themed review post. Set in the near future or an alternate present, the story is about two rivaling detective organisations aiding the police in murder investigations, one government-sponsored and the other a group of precocious teenagers. The former, however, becomes the target of mass murder themselves…

The artwork is competent but unremarkable (except for the eccentric character designs) – the biggest draw of this manga is its irreverent attitude towards the detective genre: time and again, the initial, overly convoluted explanations that the detectives offer as solutions to the murder cases turn out to be wrong. There’s also a nice metafictional sub(?)-plot about a former detective who has become a writer of mystery novels.

This is certainly a manga that stands out by virtue of its weirdness, but it’s hard to really like it.

Scariest moment: the first of the eponymous ‘detective rituals’, a gruesome mass decapitation which is re-visited several times. 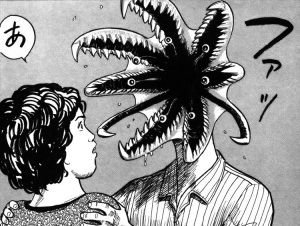 Parasyte is a horror manga classic, but its publication in German began only this year, probably in order to exploit a renewed interest in the property that has been sparked by the recent anime adaptation.

In the beginning of this story, worm-like space aliens fall on earth and crawl inside the heads of sleeping, unsuspecting people to take over their bodies. While the infested humans still look like before, the aliens are able to transform their heads into claws and fangs with which they prey and feast on other humans. When one of the aliens tries to take over teenaged Shinichi’s body, though, the infestation goes wrong: instead of settling in Shinichi’s brain, the alien is only able to take over his right arm. From now on, Shinichi and the intelligent, talking alien in his arm have to learn to get along, and ultimately work together to fight the other, less friendly aliens.

Despite all the gore and horror there’s also a lot of humour in this manga, and in addition to that Iwaaki even manages to insert some environmentalist messages. The artwork has a bit of an 80s feel to it, but some of the transformation sequences are downright trippy.

Scariest moment: that famous scene in chapter 1 where an alien-infested man’s head splits open, turns into a huge mouth and bites a woman’s head off.