Raymond Bellour’s essay “Of an other cinema” (PDF) was first published in French as “D’un autre cinéma” in 2000. While parts of it read like merely a review of video installation works at the 1999 Venice Biennial, the article has become an important contribution to the theory of video art. Bellour’s main point is that video installations are a different kind of cinema, and they (often) transform cinema by “dividing and multiplying” the image in several channels. Because of the difficulty to keep track of what’s going on on multiple screens at the same time, Bellour characterises the video art recipient as a “dissolved, fragmented, shaken, intermittent spectator”. Other terms used by Bellour to describe such phenomena are: “aesthetics of confusion”, “expansion of projection”, “segmentation”, “exploded story”, “explosion of perception”, or (after Abel Gance) “polyvision”.

This fragmented perception that Bellour describes is specific to (and characteristic of, maybe even defining for) video installation art. But isn’t there something similar in comics? In a way, such experiences of fragmented perception occur quite often when reading comics of several pages length: as you flip the comic open to start reading it from page 1, you involuntarily glance at another page, say, page 42. You can force yourself to continue reading from page 1, but you cannot forget what you have already seen on 42. It’s as if something is already happening in the story on page 42, at the same time that you’re reading page 1. In this respect, each comic page (or each double page) is like a screen or a channel in a video installation, as only one can be perceived at a time, while on each another segment of the story unfolds simultaneously.

But there are certain comics which are even closer to what Bellour describes. I’m thinking of experimental comics, particularly “choose you own adventure”-style comics with parallel story branches. As an example, I initially wanted to dig up a particular episode of Winston Rowntree’s Subnormality that employed this method, but I discovered that the latest episode, 214: “Accidentally Insulting a Friend”, serves this purpose just as well. Instead of embedding the original image of this webcomic here, I suggest you follow the link to read it. 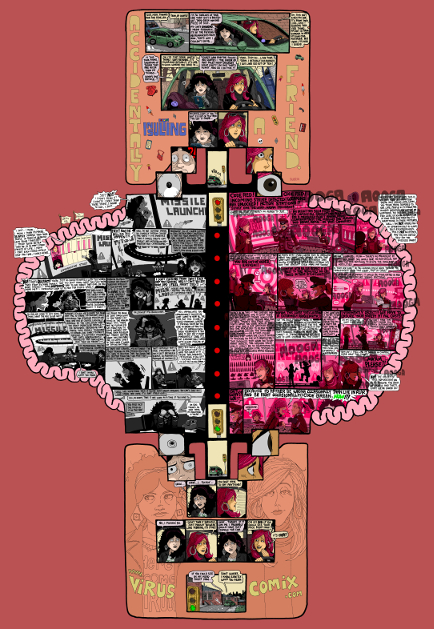 For the first five panels, this comic is relatively traditional, as we follow the conversation of the two young women in a car. Then, by the sixth panel, things get interesting. Which is the sixth panel, actually? Which is the seventh? The reading order up to this point was left-to-right and top-to-bottom, but that wouldn’t make sense at this point anymore, as the comic is split into a left branch and a right branch, which show what’s going on inside each protagonist’s head (plus the middle branch with the traffic light panels). The branches unite again towards the end of the episode, but in the middle, they unfold in parallel, both spatially and chronologically. You can start by reading the left branch first and then scroll up to continue with the top panel on the right hand side, or vice versa. However, while you’re reading the branch you’ve chosen to start with, you’re missing out on what’s happening at the same time in the other one. Thus, as the story of this comic “explodes”, the perception of it is fragmented, not unlike that of a multi-channel video installation.