Arthur Danto’s Transfiguration of the Commonplace – in comics?

Arthur Danto’s The Transfiguration of the Commonplace. A Philosophy of Art (Harvard University Press, 1981) is similar to Nina Zschocke’s Der irritierte Blick in that they both make a specific point while at the same time serving as an introduction to their respective field at large. In the case of Danto’s book, we are given a comprehensive overview of Aesthetics from ancient Greece to the 1970s, although not in chronological order but arranged around the problem that is central to the book: in the light of artworks such as Marcel Duchamp’s Fountain or Andy Warhol’s Brillo Box, which look exactly (for the purposes of this discussion) like objects that are not artworks, what is the difference between these artworks and other urinals / brillo pad boxes (“mere objects”) that makes the former artworks and the latter not?

Danto critically engages with and rejects several theories before tentatively approaching something like his own definition of art: all artworks are to some extent self-referential; “in addition to being about whatever they are about, they are about the way they are about that” (p. 148-9). Put another way, “the way the content is presented in relationship to the content itself is something that must always be taken into consideration in analyzing a work of art” (p. 146-7). Therefore a lot depends on the person that does the presenting – the artist – and the production process. In a way, after the ‘Death of the Author’, he or she is thus resurrected, “as if the work of art were the externalization of the artist who made it, as if to appreciate the work is to see the world through the artist’s sensibility and not just to see the world” (p. 160).

In comics, however, we appear to have the opposite problem. Comics are rarely indistinguishable from mere objects. While a comic book can be used to swat a fly and a tankōbon put under a leg of an uneven table, the person (ab)using comics in such a way is aware that they are not mere flyswatters or furniture wedges. Instead, for many people (including some scholarly authors) a comic can change its form – e.g. from pamphlet to trade paperback to digital – and remain the same work.

Consider this example: below you see a photograph of a 4-panel comic by Reza Farazmand titled “Stereotype”. 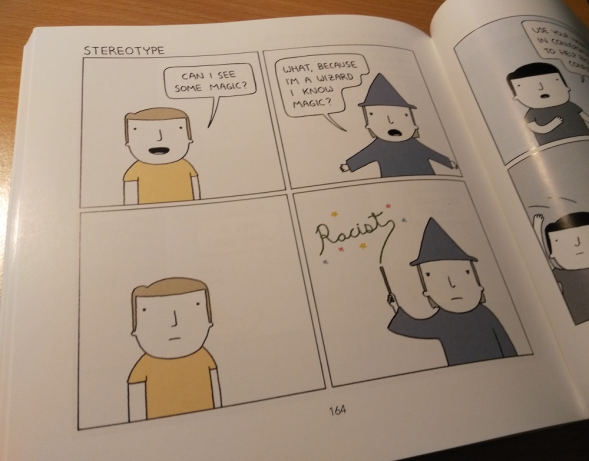 Compare this to the following screenshot: 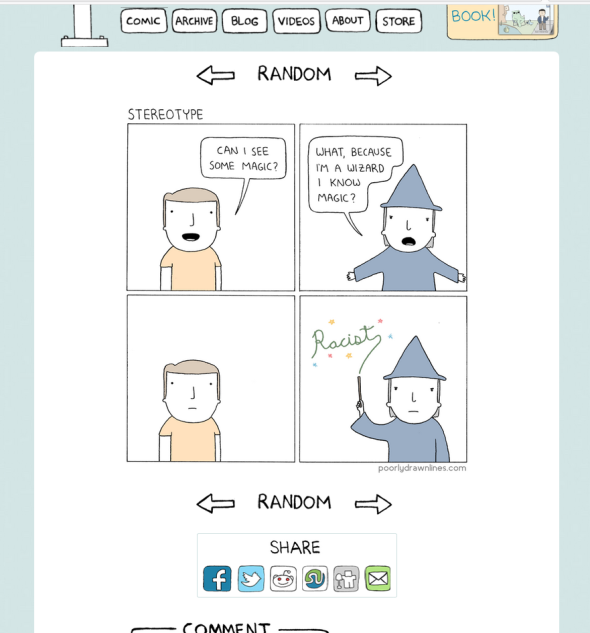 Apart from minor differences such as the page number in the first picture and the URL “poorlydrawnlines.com” in the second, these two comics look pretty much the same, right? Wrong. The second comic has different dimensions (depending on my browser settings – currently I’ve blown it up to 24 × 24 cm), its colour shades are different (depending on my computer screen settings), light is reflected differently off its surface, it even glows by itself… Not to mention the different feel and smell. And yet, most people would say both are the same comic, “Stereotype” by Reza Farazmand.

I can, for example, burn up a copy of the book in which a poem is printed, but it is far from clear that in so doing I have burned up the poem, since it seems plain that though the page was destroyed, the poem was not; and though it exists elsewhere, say in another copy, the poem cannot merely be identical with that copy. For the same reason, it cannot be identified with the pages just burned. […] Often enough poets and philosophers have thought of artworks as thus only tenuously connected with their embodiments.

Doesn’t this contradict the emphasis Danto puts on “the way the content is presented” (see above)? Or doesn’t he count himself among the “poets and philosophers” who dismiss the physical form of an artwork? On p. 93-94 it looks like he does:

Cohen has supposed that Duchamp’s work is not the urinal at all but the gesture of exhibiting it; and the gesture, if that indeed is the work, has no gleaming surfaces to speak of […]. But certainly the work itself has properties that urinals themselves lack: it is daring, impudent, irreverent, witty, and clever.

I’m not a literary critic, but I think the problem here lies in the very different nature of poems (in the above example) and artistic artifacts such as sculpture (with which most other examples are concerned), or perhaps in the different perspectives of literary criticism and art history: for the literary critic, a poem remains the same work no matter if it is printed in a book or read aloud at a reading. For the art historian, the same content presented in two different media (e.g. the same view painted in oil and printed from a photograph, or perhaps photographed using two different cameras) constitute two different works. That’s why Danto’s theory doesn’t quite work for his poetry example, but it does work well for Duchamp’s Fountain for which its gleaming surface is a vital property.

And this distinction places us accidentally but directly into the current state of Comics Studies. We always like to think of our field as a place where scholars from vastly different disciplines gather to harmoniously discuss the same objects – but for some of us, they’re not the same objects. The way I understand Danto, he would interpret both the paper page of the first “Stereotype” example and the computer screen of the second as their respective self-referential setup.

Let’s think this example through: if paper and screen are “the way they [i.e. artworks] are about” something, what is it that “Stereotype” is about? There are, of course, many possible correct answers to that. You could say it’s about a wizard and another guy. You could also say it’s about political correctness gone too far when ‘racist’ is used as a ‘killer argument’ or ‘moral bludgeon’, even in situations when it isn’t applicable (unless you consider ‘wizards’ a race – see the comment thread on poorlydrawnlines.com for that…). Let’s go with that. If we take it as a socio-critical statement, it’s easy to imagine how, as a webcomic, “Stereotype” gets shared by readers who want to make the same statement, e.g. sending the link or graphic to a friend who is of the same (or opposite) opinion. Farazmand seems to have anticipated this kind of distribution of his webcomics and encourages it by putting the source reference “poorlydrawnlines.com” in the bottom right corner and offering “Share” buttons below.

However, when printing “Stereotype” in a book, the ‘way it is about political correctness’ is a different one. The comic is now part of product that costs money; purchasing a copy of the book is a way for the customer to say: I get Farazmand’s message, I agree with it, I want to support him by buying his book, and I want to spread the message by displaying the book on my shelf (or reading it on the train or whatever). In order to enable this kind of interaction, Farazmand creates and compiles comics that form part of a coherent message, or authorial voice, or persona, which is situated firmly in the political (moderate) left but also pokes fun at its own milieu (more straightforward comics such as this one, also included in the book, notwithstanding). This kind of coherence is far less important when putting a comic online, where it can be perceived (and disseminated further) in isolation – and for free.

All that being said, there isn’t much in Transfiguration of the Commonplace that is directly applicable to comics, but for anyone interested in readymades or philosophy of art, it’s required reading.

This time, we’re going to look at a theoretical concept which is not specific to art history: heterotopias, or “other spaces”, described by philosopher Michel Foucault in a talk in the 1960s which was published in the 1980s. He defines heterotopias as “something like counter-sites […] in which the real sites, all the other real sites that can be found within the culture, are simultaneously represented, contested, and inverted.” Foucault then lists six “principles” to further characterise heterotopias:

These “principles” are not meant to be necessary characteristics of heterotopias, i.e. a space doesn’t need to fulfil all six principles to be regarded as a heterotopia. This rather vague definition means we can apply the term heterotopia to many different spaces. In art history, we mainly deal with two kinds of spaces: real spaces in which art is produced and received, and imaginary spaces conveyed by the content of works of art. For the former, see e.g. Ruth Reiche’s recent blog post (in German) on cinemas and museums as heterotopias. I’m going to look at the latter now, and try to find out what is to be gained when we conceive a space in a comic as a heterotopia.

The sequence I have selected for this purpose is from an episode of the manga classic 子連れ狼 / Kozure Ōkami (Lone Wolf and Cub) by Kazuo Koike and Gōseki Kojima, titled “Pitiful Osue” in the US edition (issue #2 in the First Comics series from 1987). On the first 19 (of 56) pages, we only see the infant Ogami Daigorō, the “cub”, but no trace of his father Ogami Ittō, the “lone wolf”. Then suddenly, starting with p. 20, the page background turns black for five pages. A caption text tells us we’re “elsewhere” now, and we witness Ogami (Ittō) fighting against animal-headed demons amidst swirling fumes. Is this new setting a heterotopia?

The basic definition, a counter-site which represents and inverts real sites, might be applicable: in this hell (Ogami himself uses this term later), the twisting, naked bodies are representations of the people on earth. Ogami seems unchanged at first, but then his sword breaks in the fight – something which probably never happens to him in “real” life – and he doesn’t overcome his enemies. Some of Foucault’s six principles also hold true for this hellish place:

So what do we make of this dream/hell now that we’ve identified it as a heterotopia? Above all other characteristics, heterotopias are radically different from real places, and this “otherness” might be the key to understanding the role of the dream sequence in the story: it marks a harsh change of perspective from Daigorō to his father, who are for once far apart from each other in the beginning of this episode. By shifting from the real world to the heterotopian underworld, the authors emphasise that father and son are “worlds apart”. In the course of the episode, they will have to find each other again, so that the order at the basis of Kozure Ōkami – the companionship of “wolf” and “cub” – is restored.