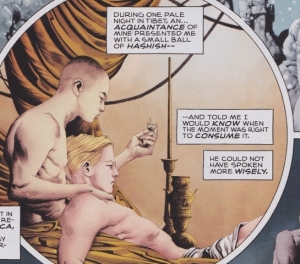 I confess: I have read and purchased copies of several Before Watchmen issues, and plan to continue to do so. For some people, this is an immoral act, equivalent to slapping Alan Moore in the face. Other people say Moore made a mistake when he signed his contract with DC, and now he has to pay for it. In any case, I was curious to see how the Before Watchmen books would handle the unavoidable intertextual challenges that come with such a task.

In preparation, I re-read Watchmen, to be better able to get all the references in Before Watchmen. Maybe that was a mistake, because it raised my expectations towards Before Watchmen even more. Consequently, I decided to read all seven #1 issues and then select which series I’m going to follow.

The books that I dropped after the first issue were Nite Owl, Comedian, and Dr. Manhattan. With Nite Owl and Dr. Manhattan, I found the stories were too close to the original series and didn’t add much to it, whereas the storytelling in Comedian was too slow-paced to convince me that the plot was going anywhere soon. That leaves me with Minutemen, Silk Spectre, Ozymandias, and Rorschach. Ozymandias is the only book so far of which I have read two issues, which I consider the minimum for a meaningful review. (Minutemen #2 came out earlier, but due to a mail order fail I didn’t get it yet.)

Review of Before Watchmen: Ozymandias #1-2

The framing narrative here is that Adrian Veidt tells his life story on October 11, 1985. I instantly recognized some of Veidt’s words as Moore’s, and thought that Len Wein just wanted to flesh out Veidt’s autobiography as told in Watchmen chapter XI (“Look On My Works, Ye Mighty…”). However, reading both sequences side by side reveals vast differences: in Watchmen, Veidt’s monologue takes place much later than October 11. The wording is different – sometimes considerably, sometimes only slightly, e.g.: “Strangely, before subduing Phoenicia, he had struck north toward Gordium” (Wein) vs. “Strangely, before subduing Phoenicia, he struck north towards Gordium” (Moore). And there are inexplicable visual differences too: in Watchmen, the gravestone of Veidt’s parents is rectangular with a rounded top, whereas in Before Watchmen he is standing at two gravestones in the shape of celtic crosses. So unless Veidt is randomly dropping roses at strangers’ graves, Jae Lee or Len Wein altered the appearance of the grave, presumably to make it look cooler.

The completely new things that Wein adds to Veidt’s origin story aren’t convincing either. As Jennifer Cheng already said in her review of Ozymandias #1 at CBR, it is hard to believe that the reason why Veidt would become the masked vigilante Ozymandias is to avenge his lover Miranda. Furthermore, given the importance attributed to this relationship, what are the readers supposed to make of Veidt’s homosexuality that is clearly hinted at some pages earlier?

Then again, the selling point of the book isn’t its plot, or its unlikeable protagonist. It’s Jae Lee’s spectacular art, as several other reviewers have pointed out. The success of Lee’s contrast-heavy style depends on good colourists, and luckily, June Chung is more than up to this job. Thus, Before Watchmen: Ozymandias is a series that makes me want to read more by Jae Lee and less by Len Wein.

As for “The Curse of the Crimson Corsair”, the backup story by Len Wein and John Higgins: while “Tales of the Black Freighter” was smartly interwoven with the main story in Watchmen, an independent pirate/horror story spread across all Before Watchmen series doesn’t make sense to me. I wouldn’t mind reading a well-written and well-drawn standalone comic book in this genre, though (and the success of the Pirates of the Caribbean films shows that this genre has market potential).