Another year has passed in which Moon Knight was largely ignored by critics. Rightfully so? The last story arc by Max Bemis and Jacen Burrows, collected in a trade paperback titled “Crazy Runs in the Family”, showed great potential. What came afterwards, though, was quite a mixed bag:

#194, drawn by Ty Templeton, is seemingly a one-shot which introduces Uncle Ernst, a supervillain from Marc Spector’s childhood.

#195-196, with brilliant artwork by Paul Davidson, is a weird and charming little story about The Collective, a new supervillain (or group of villains?).

#197-198, drawn by Jacen Burrows again, seem to tell a very similar tale about another group of adversaries, the Société des Sadiques. Their leader turns out to be none other than Uncle Ernst, which in hindsight makes #194 the first part of this story arc.

Although the story appears to be finished with #198 (which is also the last issue to be collected in the TPB, “Phases”), #199 (art by Davidson again) continues it with another face-off between Moon Knight and Ernst.

#200 (still drawn by Davidson), finally, brings back the supervillains from the previous arc, Sun King and The Truth, the former allying with Moon Knight while the latter has been corrupted by Ernst.

Thus, with the interruption of #195-196, we basically have a five-part finale, the cohesion of which is futher damaged by the change of artists. Bemis has injected a lot of clever and darkly humorous ideas into these issues, though their connections to the Nazi Holocaust are sometimes bordering on tastelessness. Still, the cancellation of this series after this anniversary issue is a remarkable marketing failure, even for Marvel. Usually, such an anniversary would be used to invigorate and generate new interest in a series at least for the next couple of issues (which has recently worked well for e.g. Action Comics at DC), but Marvel didn’t even seem to have had that much faith in Moon Knight. The 200th issue itself is not that flashy either: a slightly increased size (30 pages) for an increased prize ($5), some guest artist pages (one each by Jeff Lemire and Bill Sienkiewicz), and an action sequence of two double-page spreads by Davidson – that’s it.

What remains in memory of this Bemis/Burrows/Davidson run is a number of whacky characters, stunningly drawn panels, witty lines of dialogue, and ways of storytelling that at least feel fresh. And three comic creators to watch (although Bemis seems to identify more as a rock musician). However, the lack of success of a rock-solid series such as Moon Knight also says a lot about the current state of American superhero comics in which such a vast amount of material is published each week that the comic books are cannibalising each other in their competition for reader attention.

Regular readers of this weblog might have gathered from earlier posts that the two previous Moon Knight incarnations, the Ellis/Shalvey run and particularly the Lemire/Smallwood run, ought to be regarded as highlights of the superhero genre of this decade. Now that the first storyarc in the first six issues of the latest Moon Knight run (#188-193 in the annoying new “Legacy” numbering) has been completed, it’s time to ask: how does it hold up?

In the afterword to the first issue, artist Jacen Burrows says, “Moon Knight has been in a sort of creative renaissance since Warren Ellis and Declan Shalvey relaunched the character in 2014, all the way through the amazing arc recently completed by Jeff Lemire, Greg Smallwood and company, and we hope to continue this by making the next important chapter in Marc Spector’s life thought-provoking, intense, a little scary, and a little funny.”

It’s reassuring to read that Bemis and Burrows decided to honour the – ahem – legacy of Moon Knight instead of wiping the slate once again, as some previous Moon Knight authors have done. The first issue (#188) is even entirely told from the perspective of Dr. Emmet, Marc Spector’s psychiatrist, a character created only recently by Lemire and Smallwood. Telling a story about a character from the perspective of his or her psychiatrist isn’t a new device. Neither is the introduction of an ‘evil twin’ sort of villain, a character similar to Moon Knight who is set up as his rival. However, combining these two devices to the effect that Moon Knight himself doesn’t directly appear in the whole first issue is quite a daring move. 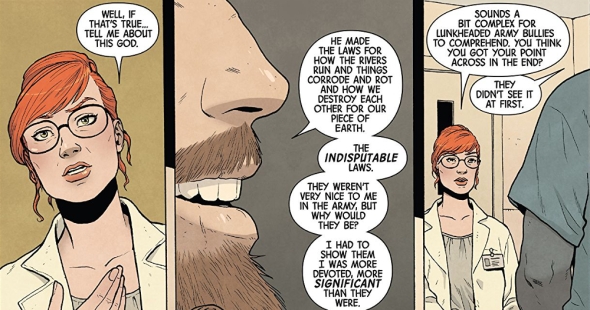 The second issue (#189), however, introduces another villain, “The Truth”, who is chased and confronted by Moon Knight. The concept of Moon Knight’s split personality disorder (Marc Spector / Steven Grant / Jake Lockley) is expanded to the effect that he now, more deliberately than before, switches between his personalities so that he has e.g. Jake Lockley do all the dirty work. Jake is the personality that contains Moon Knight’s darkest, most violent and ruthless aspects, from which the other personalities are kept clean.

In #190, Jake and Marc have a conversation about this in his (their?) mind. Jake says, “Kid, you sliced me off your personality and sent me to live among freaks, addicts, and criminals. There are things you don’t want to know. […] Look. Steven is the wealthy benefactor. Khonshu is our connection to the bigger picture. You’re the voice of reason. And I deal with the grimy leftovers. You built us this way.” Just how great the divide between these personalities is becomes clear later in this third issue, when Marc visits his ex-girlfriend Marlene and finds out that, unbeknownst to him, as it were, she had been dating Jake instead after having split up with Marc.

Khonshu does a lot of talking too, as he is the narrator for most of this story. In #191, he dispenses a peculiar theological lecture to Moon Knight in which he suggests that the Lovecraftian Old Ones, the Judeo-Christian God, and Ancient Egyptian Ra (father of Khonshu) are one and the same. However, as always, we can’t be sure whether Khonshu is really a supernatural individual or just another aspect of Moon Knight’s twisted mind.

Meanwhile, the other supervillain, who calls himself Ra because he believes he’s the avatar of this Egyptian god, has teamed up with The Truth and lured Moon Knight on a remote island. In the final issue of this storyarc (#193), Moon Knight and Ra fight. It’s not a very fair fight because Ra is a pyrokinetic, whereas Moon Knight doesn’t have any superpowers. Or so one might have thought, but then Steven Grant figures it all out: “Khonhsu. Are you saying […] if Sun King’s [i.e. Ra’s] belief is a part of him, and in some weird metatextual way relates to his abilities, that, in a way, Marc has powers of his own?”

Some weird metatextual way indeed. The power which Moon Knight’s delusion grants him is only his near-superhuman tenacity (“the power of crazy”), but doesn’t that also mean Ra got his pyrokinetic ability because he became mentally ill? More precisely, ironically it was Dr. Emmet who gave him ideas about Egyptian mythology and thus unintentionally awakened his superpower. Quite a problematic plot point, but then again, this is the Marvel Universe, where people acquire supernatural abilities through gamma rays and the like, so why not through the sheer power of imagination…

So the writing is a mixed bag of good and not so good ideas. As for the art, it’s more than solid, even beautiful. Jacen Burrows’s style is perhaps best compared to Frank Quitely’s, with its thin clear outlines and little shading. However, while there are many clever compositions and layouts to be found here, Burrows’s art lacks the groundbreaking creative force and the eagerness to experiment for which his predecessors on the title, Smallwood and Shalvey, will be remembered. An unfair comparison, perhaps, but unavoidable. Nevertheless, I’m looking forward to finding out where Bemis and Burrows are going to take Moon Knight – this still has the potential to turn into another historic run.