Last month, the 9th annual conference of the German Society for Comics Studies (ComFor) took place in Berlin. Unfortunately I missed half of it, so instead of a proper conference report (not that my previous ComFor conference posts – 2012, 2013 – were proper reports), I thought I’d just point out my favourite talk out of the ones I have heard:

Julia Ingold (Kiel University) presented an allegorical reading of Markus Färber‘s comic Reprobus. Reprobus seems to be Färber’s first standalone comic, and was published only two years ago. In this comic, Färber re-tells the legend of Saint Christopher (who was called Reprobus before he met Jesus), albeit with some twists. Reprobus is a beautifully drawn comic, and its non-linear story is cleverly written. But that’s beside the point. 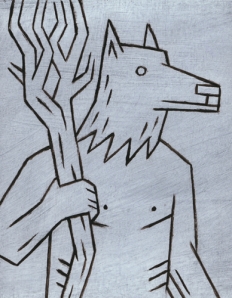 Reprobus, the dog-headed giant, has yet to become Christophorus.

In her talk, Julia Ingold referenced Craig Owens’s text “The Allegorical Impulse” (which I have discussed on this weblog last year), and placed Reprobus in a postmodern context. That latter statement was more of an incidental remark, if I remember correctly, as her main point was the reading of Reprobus as allegory through Owens. Therefore I won’t hold it against her that she didn’t take the time to expand on what’s postmodern(ist) about Reprobus.

It’s easy enough to recognise Reprobus in “The Allegorical Impulse”, or vice versa: Reprobus is a typical example of a “palimpsest”, of “reading one text through another”, of the artistic strategy of “appropriation”, in that Reprobus “confiscates” the legend of Saint Christopher (all quotations from Owens). The problematic point is that for Owens, this allegorical impulse is already the characteristic that distinguishes postmodernist from modernist art. Nowadays, as I have tried to show in the aforementioned blog post on Owens, Foster and Ishinomori, Owens’s view of postmodernism is only one of many.

Hal Foster, on the other hand, emphasises (in “Postmodernism: A Preface”) the challenging stance of postmodernism towards the social context of objects.* I find it hard to see such a thrust in Reprobus. The “realm of myths and legends” is “sinking into oblivion”? The people in the big city “have almost forgotten” about Jesus? If this story was really intended as a critique of contemporary society, it’s about 100 years late. This comic combines rather old-fashioned aspects with some undeniably timely traits – which isn’t a bad thing, but makes me reluctant to classify it as entirely postmodernist.

The papers of the ComFor conference aren’t published yet, but an earlier article by Julia Ingold on Reprobus can be read in the latest issue of the journal helden. heroes. héros. (PDF, German).

* Why do I keep returning to those two texts by Owens and Foster? Certainly not because they’re the most convincing, or best written, on postmodernism. They do, however, have the advantage of having been published at a relatively early point in that discourse, of representing quite different – almost contrary – views, and of exerting a lasting influence.