Out of Marie-Laure Ryan’s many narratological works, one of the most cited appears to be “Toward a definition of narrative”, a chapter from The Cambridge Companion to Narrative (ed. David Herman, Cambridge 2007; Ryan’s chapter is on pp. 22–35). Prompted by the “inflation” of the term ‘narrative’ in the wake of the “‘narrative turn in the humanities'”, Ryan begins her text as a review of previous definitions of the concept of narrative, finds them all unsatisfactory and then comes up with her own.

Ryan proposes a “fuzzy-set definition” of narrative. Regardless of how appropriate the term ‘fuzzy set’ is here, the key idea is that this allows for “variable degrees of membership” to the set of narrative texts. In the application of such a definition, it becomes more meaningful to ask questions like “‘is Finnegans Wake more narrative than Little Red Riding Hood?'” rather than binary yes/no questions like “‘is Finnegans Wake a narrative?'”. Such a type of definition makes sense here, as it would for many other concepts, even though it is still met with opposition from many Humanities scholars.

Another feature of Ryan’s definition is that the criteria or conditions it is made of are not of equal value. Instead, they are presented in an order from broadest to narrowest, with each condition presupposing the previous ones, or from most to least necessary. (There are no sufficient conditions in this type of definition.) As these eight conditions are widely available online anyway, I’m going to list them here also, though I recommend reading them in their original context.

Clearly, the further down the list we go, the more debatable the conditions become. However, while one might be able to imagine a narrative without e.g. “intelligent agents”, one cannot deny that these are typical of narratives.

So far, so good, but what does this have to do with comics? Earlier in her text, Ryan calls narrative a “temporally ordered sequence of events” and identifies the lack of “clearly definable ‘narrative units’ comparable to the words or phonemes of language” as one of the main problems in its definition. Couldn’t the sequentially arranged units of comics – the panels – serve as such a narrative unit?

In many cases, this analogy works well. Consider the following panels from Black Magic (ブラックマジック), Masamune Shirow’s first published manga from 1983 (read from right to left):

Each of the panels could be said to depict an action, and we could describe this sequence of events in one sentence each: “Typhon says, ‘here’s to humanity’. Then Yasha says, ‘right’. Then Kongoki says, ‘to my daughter’.” (Of course, that’s just one of many valid possibilities; one could just as well describe it as e.g. “Typhon lifts a bottle, then Yasha turns towards her, then Kongoki raises his glass”.) Not the most interesting narrative, perhaps, but one can easily imagine that these three panels are part of a whole, proper story if preceded and succeeded by many more like them.

However, this only works well because we are dealing with, in the terminology of Scott McCloud, subject-to-subject transitions between these panels. Another type of McCloudian panel transition which can easily be ‘translated’ to a narrative sequence of events is action-to-action (in which the agent stays the same). But what about other transition types? The subsequent panels are quite different in this regard: 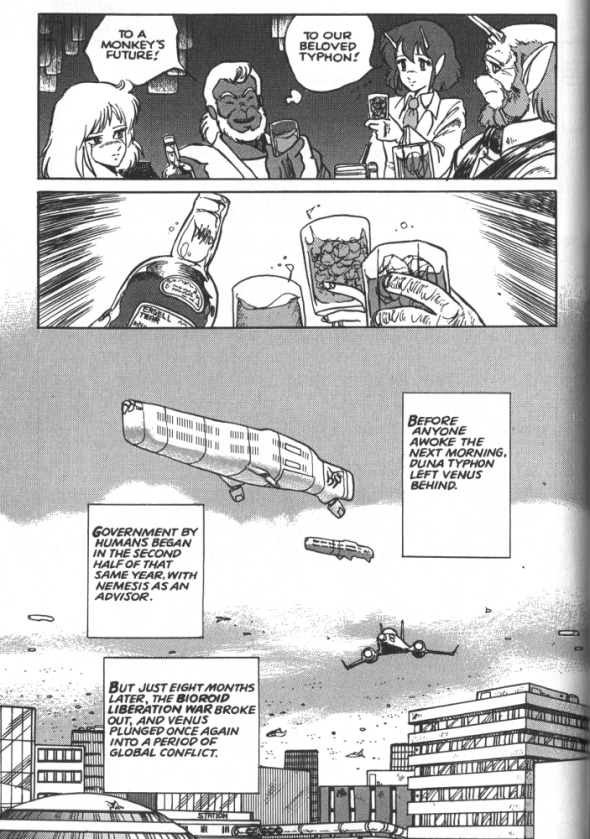 The transition from the first to the second panel on this page is an action-to-action transition, but the next one is a little tricky. The perspective shifts from the interior of the bar to an exterior view of the city, and it is day instead of night (assuming that the characters at the bar are meeting for drinks in the evening – then again, the story takes place on Venus, so who knows). The first caption might be understood as an explanation of this shift: “Before anyone awoke the next morning, Duna Typhon left Venus behind.” So this panel shows the city on the next day, and there’s a building labeled “station” from which Typhon might have departed, or maybe she’s leaving the planet right now on one of the aircraft depicted. This would make the transition a scene-to-scene transition, but we could still incorporate it into a narrative structure: “The friends propose toasts. Then they raise their glasses. Then Typhon leaves Venus.”

However, there are two more caption boxes placed in this panel, and they complicate matters quite a bit: the second caption (“Government by humans began…”) extends the time frame to months and the scale from individual characters to the whole Venusian society. The third caption even stretches out chronologically to an entire “period” of possibly many years. This doesn’t change the transition between this panel and the preceding one – still scene-to-scene – but in Ryan’s definition of narrative, the first condition is now threatened as the story shifts its focus from “individuated existents” to more abstract entities (“government”, “Venus”) and from “intelligent agents” (the 4th condition) to seemingly ‘agentless’ actions (“war broke out”).

This doesn’t mean that Black Magic isn’t a narrative. But we can say that in this little six-panel sequence, its “degree of narrativity” decreases slightly towards the end. Such fluctuations in narrativity are nothing unusual and not specific to comics; they occur e.g. in novels too. With her definition of narrative, Ryan gives us a powerful tool to describe such developments and to compare different works in this regard. Even more complex is Ryan’s suggestion of her definition as a “basis for a semantic typology of narrative texts. While degree of narrativity depends on how many of the conditions are fulfilled, typology depends on the relative prominence” of the conditions fulfilled, i.e. not only how many but also which. Thus each work could be thought of as a specific configuration of fulfilled narrative conditions.