In November last year, I gave a talk at Comics Forum in Leeds on “Early manga translations in the West: underground cult or mainstream failure?”

That paper is now online at the Comics Forum website: http://comicsforum.org/2014/07/14/early-manga-translations-in-the-west-underground-cult-or-mainstream-failure-by-martin-de-la-iglesia/.

If you always wanted to know what my PhD research is about, this is the place to go. 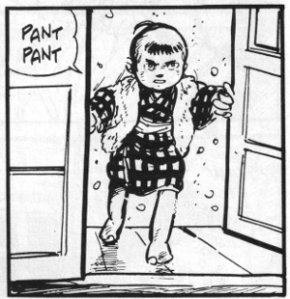 Unfortunately, Dark Horse didn’t give me permission to use images from Lone Wolf and Cub in my Comics Forum paper…

The other day, Forrest Helvie posted a nice summary of the “Bechdel Test” and the “Sexy Lamp Test” at sequart.org. Both of these tests are used to gauge gender bias in comics, even though they were not originally intended for that purpose by their inventors, Alison Bechdel and Kelly Sue DeConnick, respectively. Due to both Bechdel and DeConnick being comic creators, rather than theorists, it’s not surprising that in their original form, both tests are under-theorised (i.e. no explanation is given why they should work at all) as well as under-operationalised (i.e. there are many different possible ways to apply them). This in turn has led a lot of people to perceive these tests as simple and consequently apply them to a lot of different things.

Rather than debate their flaws and merits, I’ll just join in and see how they work for some comics I’ve been reading lately. I’ll start with the Bechdel Test (reserving the Sexy Lamp Test for another blog post), which consists of three parts:

A work (originally a film) passes the test if

1. It has at least two women in it
2. Who talk to each other
3. About something besides a man.

One way of putting this into practice is to design a ranking system in which the parts of the test add up, e.g. on the Bechdel Test Movie List which uses different icons for four ranks from “Fewer than two women in this movie” up to “There are two or more women in this movie and they talk to each other about something other than a man”. In contrast, the website Bechdel Testing Comics simply labels comic book issues as either “Failed” or “Passed”.

I’m going to try something else that I think is better suited for comics of different lengths: I’ll look for the first page of a comic on which the dialogue of two women about something besides a man occurs. Let’s start with a manga that I’ve already offhandedly accused of sexism: Shōtarō Ishinomori’s Japan Inc. (マンガ日本経済入門 / Manga Nihon Keizai Nyūmon). Originally published from 1986-88 in three volumes, the first volume was translated into English in 1988, which is the edition I’ll use here.

And that’s it! On 313 pages, there’s not a single instance of two women talking about something besides a man. (The second volume of Japan Inc. is a different story with a different cast of characters.)

At around the same time (1987), Mai, the Psychic Girl (舞 / Mai) by Kazuya Kudō and Ryōichi Ikegami was published in English. Its protagonist is a young woman, so surely this manga does better at the Bechdel Test?

Thus we can say Mai, the Psychic Girl has passed the Bechdel Test, whereas Japan Inc. has failed.

The Bechdel Test has often been criticised for not being able to detect sexism and misogyny in every instance, but as this little comparison hopefully shows, it’s a good way to get started on talking about gender bias problems in comics.

Although some people have already proclaimed the death of postmodernism, it is still a relatively new phenomenon, and the term is quite ambiguous. Therefore it makes sense to approach it by reading several texts which reflect different opinions, for instance “The Allegorical Impulse: Toward a Theory of Postmodernism” by Craig Owens alongside “Postmodernism: A Preface” by Hal Foster (the art historian, not the comic artist). Both were published in the early 1980s already – Owens’s in the journal October in 1980, Foster’s as an introduction to a book he edited in 1983 (The Anti-Aesthetic. Essays on Postmodern Culture), and this timeliness might have contributed to the differences between their respective understanding of postmodernism.

Owens lists six artistic strategies which distinguish postmodernist from modernist art: appropriation, site specificity, impermanence, accumulation, discursivity, and hybridisation. As with Foucault’s heterotopian principles, these strategies are not necessary characteristics – the artists discussed by Owens employ some of them, but not all six at the same time. In this sense, many comics can be identified as “postmodernist”.

Take, for instance, Shotaro Ishinomori’s マンガ日本経済入門 / Manga Nihon Keizai Nyūmon (translated as Japan Inc.: Introduction to Japanese Economics in the English edition), first published in 1986. Sometimes referred to as a non-fictional comic, it actually tells a fictional story of two young managers in a Japanese company, while at the same time introducing the reader to economic facts and theories. However, it’s not the content that makes this comic a postmodernist comic, even though it would have lent itself to a discursive treatment of e.g. economic policy. It is a postmodernist comic in Owens’s sense because it is a hybridised medium (at least in the German edition from 1989 which I’m referring to in the following): apart from the comic panels, Manga Nihon Keizai Nyūmon consists of three repetitive pictureless elements. There are hand-lettered notes of usually about 3 to 5 lines length at the bottom of approximately every other page, which provide economic background information that may or may not be connected to the events on the same page. Then there are longer, typeset texts on their own pages (pp. 27, 41, 105, 167, 223, 257) in the same vein, and quotations from economists on the chapter title pages (pp. 9, 71, 125, 179, 233, 285). This clash of regular comic layouts and non-comic elements shows that hybridisation is at work here, one of Owens’s six postmodernist strategies. (A similar example of this strategy would be the use of text-only pages in Alan Moore’s and Dave Gibbons’s Watchmen, of course.) 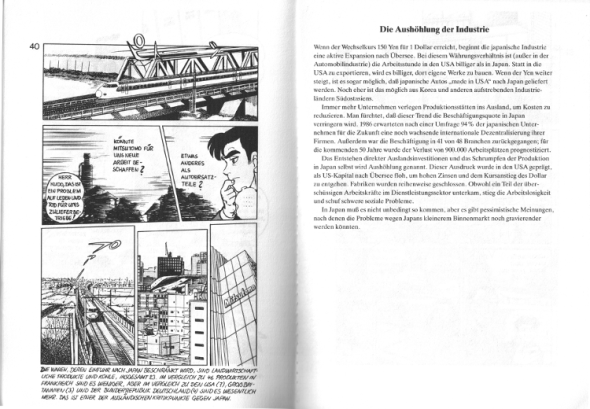 Although the cultural codes and social and political affiliations of the business world are extensively featured in Manga Nihon Keizai Nyūmon, they are never put into question. Economic doctrines are presented as irrevocable truth. One of the protagonists, the young idealistic manager, has his employees’ welfare on his mind and tries to change things for the better, but he does so from within the business system, by playing along with its rules. Neither are paternalistic and sexist tendencies criticised. Because of this lack of discursivity, I doubt that Foster would regard Ishinomori’s comic as (resistant) postmodernist.

For a different take on postmodernism and comics, see Noah Berlatsky’s essay on Fredric Jameson at The Hooded Utilitarian.