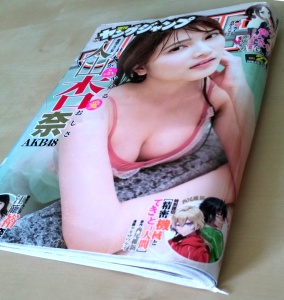 So this is the thing around which the whole manga industry revolves: the manga magazine.

More precisely, this is a copy of the June 16 issue of 週刊ヤングジャンプ / Weekly Young Jump. Not quite as legendary as 週刊少年ジャンプ / Weekly Shōnen Jump by the same publisher, it is still a venerable manga anthology magazine that is sold at every convenience store.

Manga magazines are often said to be ‘phone book sized’, but that’s only true for the bigger monthly magazines. The smaller weekly ones like Young Jump are staple bound, measuring ‘only’ approximately 25,5 × 17 × 2 cm. This also means that the paper format is about 1.5 times larger than a tankobon.

The most obvious difference between Young Jump and Shōnen Jump is the ‘gravure idol’ on the cover of the former, advertising photo pages of young women in underwear at the beginning (in this issue: Anna Iriyama from AKB48, 8 pages) and end (Yūna Ego from SKE48, 6 pages) of the magazine. In other words, the cover is not representative of 97% of the content.

A page from Legend of the Galactic Heroes by Ryu Fujisaki. The poor printing shows particularly in panels with large black areas.

As for the manga pages, their printing quality really is abysmal – light grey ink on white paper, resembling printouts when the toner is about to run out, and guaranteed to come off on your hands. But most of the time it’s good enough to let you figure out what’s going on in the drawings.

An issue contains one chapter (usually 18 pages) from each of 20 different manga series, spanning various genres such as action, sports, and ecchi. The most noteworthy in this issue are:

In the past, Weekly Young Jump ran such famous series as Gantz, Elfen Lied, Liar Game, and All You Need Is Kill.

Thanks to manga magazines like Weekly Young Jump, manga readers in Japan (in contrast to most of those outside Japan) can decide whether to buy these and get their cheap ‘weekly (or monthly) fix’, or to ‘wait for the trade’ which is more expensive and of a smaller format but of a higher printing quality. Of course, the manga industry wants readers to first buy the magazines, then discard them and buy the tankobon too.

This fellow here is ‘Chū Totoro’ / ‘Middle Totoro’, or ‘Blue Totoro’, one of (Big) Totoro’s two little helpers from Hayao Miyazaki’s anime classic となりのトトロ / My Neighbor Totoro. In this incarnation, Chū Totoro is a 4.5 cm tall plush figure. It comes with a chain to be used as a mobile phone strap charm or keychain pendant.

The interesting thing about it is, it was sold in a small department store in Ōsaka along with other merchandise, such as pencil cases or towels, of Mickey Mouse, Donald Duck, Tigger from Winnie-the-Pooh and other characters. All three of said characters are from multi-media franchises: people who buy their merchandise might know them from a television series, a comic, an animated film, or a novel. Or they might not even know where they know them from. Some characters become more popular through their merchandise than through narrative media, even if the publication of the latter precedes the former.

Take Snoopy, for instance: countless children all over the world probably have a Snoopy T-shirt or a Snoopy eraser without ever having read the Peanuts comic or watched the animated films. While we (as scholars of Japanese popular culture, or students of anime, or international ‘otaku‘) naturally trace back the Totoro characters to a single work, the aforementioned My Neighbor Totoro anime, maybe it’s different for children in Japan. For them, Totoro might be another Snoopy, as it were, who has simply always been there.

Speaking of grids: in his book about Japan¹, Empire of Signs (L’Empire des signes, 1970), Roland Barthes doesn’t mention manga and their panel grids directly. However, he comes close to it in a chapter titled “Packages”: “every [Japanese] object […] seems framed. […] around it, there is: nothing, an empty space […].” (p. 43 in the Hill and Wang translated edition; italics by Barthes). This sounds like comic panels and gutters alright. On the other hand, “this frame is invisible; the Japanese thing is not outlined” (ibid.).

Now, while outlines are certainly a typical feature of comic panels, they are by no means a necessary characteristic. Borderless layouts are rare, but they do exist. The bottom row of the Kimi ni todoke page I’ve shown in my Rosalind Krauss blogpost is one example. In the same volume, there are entire pages without panel borders, such as this one: 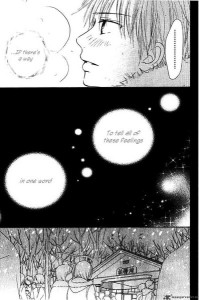 The page background is black, which means that the tiny black strip between the bottom two panels is part of the gutter, not a panel outline.

Still, Barthes is more concerned with traditional Japanese room furnishings, ikebana, and wrapped souvenirs than with comics. The interesting question here is: if the Japanese culture has developed a general fondness for framing, packaging, delimiting things, does this explain why comics with their framed panels have become so popular there? From the way in which Barthes characterises his framed objects, the answer seems to be ‘no’. “The [Japanese] thing is […] distinct […] by an excision which removes the flourishing of meaning from the object” (ibid.). Comics work the other way round: by placing a panel into a sequence of other panels, meaning is bestowed on the panel. Thus the gutter between the panels doesn’t excise them – on the contrary, it glues them together.

It’s curious and regrettable that Barthes doesn’t mention manga (or anime, or most other contemporary Japanese pop cultural media for that matter) at all in Empire of Signs. Perhaps, if he had written it 20 years later (if he would have still been alive by then), at the height of the manga boom in Japan, he wouldn’t have been able to ignore them.

¹ Barthes makes it clear, though, that his book is not about the ‘real’ Japan, but rather about a “deliberately formed system” out of “a certain number of isolated features”, a “fictive nation” which he chose to call “Japan” (p. 3 in the Hill and Wang translated edition).