Franz Wickhoff’s 1895 text Die Wiener Genesis (also known as Römische Kunst, available in English at archive.org) is best remembered for two things: on the one hand, Wickhoff recognised the value of ancient Roman art at a time when it was still regarded as a poor man’s Greek art. On the other hand, he proposed a theory of three methods of pictorial narration:

Obviously, comics with their panel borders usually use the isolating method to tell their stories. There have been attempts by comic scholars to use all three of Wickhoff’s narrative methods in definitions and classifications of comics, e.g. by Eckart Sackmann in 2006 (in German). What I’m more interested in, though, is if we can find examples of continuous and/or complementary narration in comics that predominantly use isolating narration.

To test this, I picked up a comic that I happened to be reading (not a scholarly sampling method, mind you), the French edition of J. P. Nishi’s  パリ 愛してるぜ~ / Paris aishiteruze (À Nous Deux, Paris! in French). And sure enough, there are plenty of examples of continuous narration on the first couple of pages already. Consider, for instance, an image on the third page (p. 5 in the Philippe Picquier edition): the same figure is depicted twice in a telephone booth, standing up and kneeling. The effect of this use of continuous narration is to emphasise the suddenness of the young man’s diarrhea attack – in one moment he’s still able to stand, in the next moment he isn’t anymore, but the time between these two moments is too short even for a panel transition. 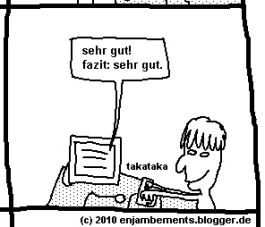 For me, Enjambements was the webcomics sensation of 2011 (although it had already been around since 2009, unnoticed by me). A selection of episodes has now been collected into an A5-sized paperback titled “Western Touch”.

A typical Enjambements episode consists of roughly square panels arranged in 2 columns and 4-8 rows. These panels are populated with pixel figures so crudely drawn that they make Diesel Sweeties look photo-realistic. The backgrounds are filled with ever-changing patterns reminiscent of computer graphics software from 25 years ago. These characteristics result in an overall art style that seems fitting for a digital medium.

In the printed book, this style works just as well: the images look like printouts from said era, retaining their simple and rough appeal. The grid arrangement practically lends itself to the portrait format of the book page (even more so than to the landscape format of a computer screen on which the webcomic version is probably usually read), with longer episodes being spread onto two facing pages (e.g. an episode with 2 x 5 panels is divided into a 2 x 2 and a 2 x 3 page).

The strength of this comic, however, lies not so much in its form but in its content. The absurdity of each little story is acted out with both straight-faced consistency and relish: where other cartoonists would stop after the gag in the third panel, Robin Vehrs just adds more panels, more gags and more absurd twists, each funnier than the one before.

Robin Vehrs is the most innovative German humour cartoonist since Joscha Sauer, and one can only hope someone will attempt to translate Western Touch into other languages. At the very least, this book is a fine object of study for anyone interested in webcomics mastering the transition to print.