Craig Owens’s Discourse of Others – in comics?

After lumping Craig Owens and Hal Foster together in a blogpost on postmodernism and then writing an entire post on Foster alone, it seems only fair to return to Owens, too. Apart from “The Allegorical Impulse”, one of Owens’s texts stands out as particularly influential: “The Discourse of Others: Feminists and Postmodernism”, published in the collected volume The Anti-Aesthetic edited by Foster in 1983. In this essay, a connection between postmodernism and feminism is made on the basis of their critique of (visual) representation. Postmodernism questions the authority on which the modernist consensus of what can be represented and in which form has been reached: “postmodernists […] expose the tyranny of the signifier“.

Feminism, on the other hand, criticises visual perception altogether as patriarchal. This identification stands on somewhat shaky ground, at least as far as it is presented by Owens: not only is vision linked to the Freudian “discovery of castration”, i.e. the “sight of phallic absence in the mother”, but also to objectification and domination, which in a patriarchal society have become male privileges. (Interestingly, Owens doesn’t mention Laura Mulvey and her 1975 essay “Visual Pleasure and Narrative Cinema”, as far as I can see.)

Considering these points, is postmodernist and/or feminist visual art conceivable at all? Yes, says Owens, and points out some examples of postmodernist/feminist artistic strategies:

However, Owens also points out the possibility of adopting contrary contemporary artistic practices that attempt to “recover some sense of mastery via the resurrection of heroic large-scale easel painting and monumental cast-bronze sculpture”. In other words, it’s up to the artist whether or not to use the previously mentioned postmodernist/feminist strategies.

30 years later, where do comics stand? Let’s look at The Multiversity #1 once more. Which strategies do Grant Morrison and Ivan Reis employ?

Mastery is not refused, but downright celebrated in this comic book. Ivan Reis’s art (not to forget Joe Prado’s inking and Nei Ruffino’s colouring) isn’t just “good” in the sense that he depicts characters in an anatomically correct way – he goes out of his way to show them in a vast variety of poses and perspectives. It truly takes a master draughtsman to produce this kind of artwork. Likewise, Grant Morrison’s writing – plot, dialogue, breakdown (cf. Morrison’s script in The Multiversity: Pax Americana #1 – Director’s Cut) – is impeccable.

There’s plenty of visual pleasure here, if by visual pleasure we mean “good girl art”. Particularly the appearances of Earth-8 Ladybug, Earth-11 Aquawoman, and Earth-23 Wonder Woman have no other purpose. (An exception to this rule is Harbinger, the artificial intelligence with a female holographic appearance, whose body is not shown here.) Thus the male viewer’s desire is never reflected.

Masculine and feminine identities are firmly in place: as I have said in my previous Multiversity blogpost, this is a story in which men act and women don’t have much to say (except for Harbinger, the femininity of which is a matter of debate). The plot is driven by the triumvirate of Nix Uotan, Thunderer and Earth-23 Superman. The brief appearance of a gay superhero couple does little to change this overall tone.

If we look at The Multiversity #1 from this perspective, it appears to be a far cry from a postmodernist and/or feminist comic.

Most of the texts examined in my “[theory] – in comics” series of blog posts stand well on their own. With Hal Foster, however, I feel that he has more to say about postmodernism than what he does say in “Postmodernism: A Preface”. So I decided to simply introduce another one of his texts here and see how it can be applied to comics: “(Post)Modern Polemics”, an essay contained in Foster’s collection Recodings from 1985.

From a scholarly perspective, “(Post)Modern Polemics” still isn’t the essay one would hope for – Foster conjures his statements out of thin air, rather than grounding them on either theory or proper empirical observations. Nevertheless, it’s an interesting opinion from an art critic who was paying close attention to what was going on in the art scene at the time. In his essay, Foster proposes a dichotomy between two concepts of postmodernism, “neoconservative postmodernism” and “poststructuralist postmodernism”. In this regard, the essay is similar to “Postmodernism: A Preface” in which Foster also proposes a postmodernist dichotomy (‘postmodernism of reaction’ and ‘postmodernism of resistance’). It should be noted, though, that Foster doesn’t claim that all contemporary art falls into one or the other of these two categories. Thus there are four possibilities for any given work of art from the mid-1980s or later: it might be neoconservative postmodernist, poststructuralist postmodernist, some other kind of postmodernist, or not postmodernist at all.

Neoconservative postmodernist art is characterised by “eclectic historicism”, “elitist allusions”, “ahistory” (i.e. it “denies historicity”), an “affirmative” stance, narratives of “masterworks” and “seminal artists”, “fragmentation”/”dampening out of connections”/”entropy”, “patriarchalism” and “phallocentrism”. Poststructuralist postmodernist art, on the other hand, is the opposite. It “questions the truth content of visual representation”, is marked by “deconstruction” and “critique”, and is concerned with “the interconnections of power and knowledge in social representations”.

Can we find some of these characteristics in contemporary comics? For instance, Grant Morrison’s Multiversity is not only one of the outstanding comics of 2014/15, it’s also a comic that looks and feels very “postmodern”, what with breaking the fourth wall and metatextual remarks on comic books. I’m going to look at The Multiversity #1 (pencilled by Ivan Reis, published October 2014) only here.

Several of Foster’s keywords are concerned with history. Although Multiversity is set in the present, with some futuristic elements, there are a few instances of the past – buildings such as the Brooklyn Bridge (p.1) from the 19th century, or the villain “Lord Broken” who looks like a historicist mansion. A Rubik’s Cube, one of the symbols of the 1980s, can be seen on p. 2 and will play a role in a later issue of the series. Then there are historical costumes: Mr. Stubbs, protagonist Nix Uotan’s monkey sidekick, is dressed like a pirate. Most strikingly, the superhero Crusader (modeled after Captain America) wears a medieval scale armour – or rather, one of these superhero costumes that look like a scale armour but appear less encumbering and more tightly fitting than a real scale armour would be. (In the same issue, Aquawoman wears a similar costume.) On his chest he wears a cross symbol similar to a Knights Templar cross. All of these historical elements seem to be instances of “historical eclecticism”: they all appear in the present alongside each other, and we don’t learn anything about the context from which they were taken. That being said, I’m not sure whether this makes the comic as a whole “ahistorical”, as there are only very few of these elements there at all.

What about patriarchalism and “phallocentrism”? Let me put it this way: the first four major characters in this story – Nix Uotan, Thunderer, Earth-23 Superman and Captain Carrot a.k.a. Rodney Rabbit – are all male. Then Harbinger, the artifical intelligence with a female face, briefly appears before letting the men take the stage again. Vice versa, let’s look at the female characters with a talking role, which you can count on the fingers of one hand: the landlady (talking on 3 panels), the President’s secretary (4 panels), Earth-23 Wonder Woman (2 panels), the aforementioned Harbinger (10 panels), and Aquawoman (5 panels) – five characters on 40 pages, and, except for Harbinger, not particularly glamourous ones at that. So Multiversity appears decidedly male-centric. I don’t think Foster means this to be a sufficient condition for neoconservative postmodernism, though.

“Elitist allusions”? Most of the characters in this comic have previously appeared in some obscure other comics, and it takes an expert on DC comics (and Marvel as well) to recognise them all.

“Masterworks”? Grant Morrison refrains from dropping his own name or otherwise inserting himself as the “master artist” in the story, but the beginning does invoke a kind of masterwork narrative: it is about a “supposedly haunted comic from DC” (Morrison’s own The Multiversity: Ultra Comics #1, published a few months later) which Nix Uotan is so excited about that he wants to review it “in the form of a live dissection”.

While there are definitely traces of neoconservative postmodernism in The Multiversity, I’m not so sure about poststructuralist postmodernist elements. Superficially, The Multiversity seems to “question the truth content of visual representation” (I think we can safely extend this to include textual representations) when we read the sequence of caption boxes (pp. 3-5): “Do we have your complete attention yet?” – “Whose voice is this speaking in your head anyway?” – “Yours?” – “Ours?” – “Stop reading.” – “Continue to read.” – “Do as we tell you.” – “The choice is yours.” This is a nice gimmick, but the questioning stops there. The rest of the comic does little to break the fourth wall; it is based on the fiction of visual representation in order to achieve a reading experience that might be engrossing but not actually immersive. 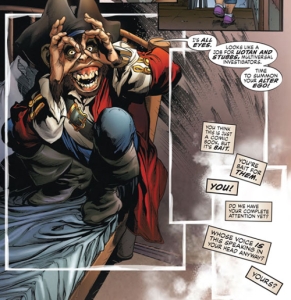 Neither is Multiversity a proper critique of comics or anything. Mr. Stubbs says things like “comic books can damage your health” and “d’ya think it’s normal to be reading the comics at your age, boss?” However, Mr. Stubbs is hardly a voice of authority, being not only a chimpanzee (i.e. not as intelligent as a human – even though he can talk) but also apparently a pirate from the 18th century with accordingly outdated opinions. Thus the reader gets the opposite message: comic books are healthy reading matter for adults.

What about “the interconnections of power and knowledge in social representations”? One thing Foster possibly means by this is that postmodernism dissolves the traditional union of artistic medium and content, i.e. the notion that a certain form of expression should represent only a certain subject matter and vice versa. Does Morrison say anything in The Multiversity that feels out of place, provocative, or outrageous for a superhero comic? You could argue that part of The Multiversity is about daring and relevant issues of race and power, too – a white proprietor collecting rent from a black tenant on one earth, a black man being both Superman and the US president on another – but in essence, it’s still a story about superheroes fighting supervillains. It’s not as if Morrison had hijacked a superhero comic book and turned it into a political pamphlet. The old paradigm of medium-specific decorum remains intact. (For a different take on The Multiversity and race, see “They Make Us Like Them: On Identity and Gentrification” by Kelly Kanayama at Women Write About Comics.)

To conclude, we have to be careful not to confuse “(Post)Modern Polemics” with a methodology that can be readily applied to comics (or any other work of art, for that matter). It’s not some test that tells us whether something is ‘postmodern’ or not. Reading a comic through Foster, however, makes us think about many different issues such as race, gender, power, identity, historicity and representation, and how they are connected to larger postmodernist ideas. Neoconservative or poststucturalist postmodernist ideas are at the bottom of many contemporary works, but rarely visible at the surface. If we have unearthed some neoconservative postmodernist notions that inform The Multiversity, that doesn’t necessarily make it a bad comic, or Grant Morrison a bad person. Then again, Foster’s essay is titled “(Post)Modern Polemics” for a reason: perhaps he wants to encourage critics to take up a stance for once.

For some clever observations on The Multiversity #1, particularly regarding its backstory, see “The Multiversity Annotations, Part 1: This Review is in the Form of a Live Dissection” by David Uzumeri at Comics Alliance.