One blogpost is not enough to pay homage to the recently deceased Jirō Taniguchi, so here’s another one.

Another noteworthy but largely overlooked manga by Taniguchi is Chichi no Koyomi (My Father’s Journal), of which there is no English translation either. The reason for its negligence in the Western world is probably a different one, though: it might be too similar to Taniguchi’s magnum opus A Distant Neighborhood – which was originally published four years *after* Chichi no Koyomi. Reading these two manga in the ‘wrong’ order makes Chichi no Koyomi feel like a compressed, less daring (no supernatural time travel) and more episodic (thus somewhat haphazard) rip-off of A Distant Neighborhood, when in fact the latter was more of a logical continuation or evolution out of the former.

Yōichi Yamashita (i.e. not Taniguchi himself but an autobiographically influenced fictitious character) is a middle-aged salaryman who lives in Tokyo with his wife. When his father dies, he needs to return to his native Tottori for the funeral, for the first time in 15 years. There he meets his uncle, his sister and other characters with whom he reminisces about his father’s life, Yōichi’s own childhood and how the rift between the two came to be.

The events in the past are shown as flashback sequences, although they take up more space than the events in the present. I wouldn’t call the present-day sequences a framing narrative, though, because several chapters begin in the past, then switch to the present, before they switch back to the past again, so that the past frames the present. There is some structural variation and jumping back and forth in time. The most strikingly structured episode is the one in which seven-year-old Yōichi runs away from home to his uncle in search of his mother: adult Yōichi begins to tell this episode on pp. 19-25, but doesn’t pick it up again until 130 pages later.

Another interesting device, albeit employed only tentatively, is an unreliable narrator: two events from Yōichi’s childhood are first shown as he remembers them, but later he learns from his relatives how he actually misremembered them. This device makes the story more dynamic; just as in A Distant Neighborhood, the past isn’t fixed but changeable. However, there is also an emphasis on a historic event in Chichi no Koyomi, the Great Fire of Tottori in 1952, which makes the past more site- and time-specific in this manga than in A Distant Neighborhood.

Artistically, Chichi no Koyomi is Taniguchi at the top of his game. Particularly the characters and their facial expressions are spot-on, which is no small feat given the number of characters, most of which appear multiple times at different ages.

However, it should be noted that the German publisher Carlsen didn’t do a particularly good job at flipping the manga so that it now reads left-to-right in this German edition: the speech bubbles and captions are often arranged diagonally in the panel, in which case the reading order is bottom(!)-left to top-right, which is awfully confusing. Furthermore, some panels are mirrored and some are not, resulting in the old problems of right-handed characters becoming left-handed and the like.

That being said, Chichi no Koyomi is a classic Taniguchi manga that one shouldn’t miss. Together with The Walking Man and A Distant Neighborhood, this manga embodies the essence of Taniguchi’s work as a mangaka.

The best manga of 2016? Review of A Silent Voice and Yona

In this second part of a two-part blog post (read part 1 here) I’ll review two more manga from 2016, the widely acclaimed A Silent Voice by Yoshitoki Ōima and the ‘dark horse’ Yona of the Dawn by Mizuho Kusanagi.

This is it. This must be the best manga of 2016. While I can’t claim to have read all manga from last year, it’s inconceivable that another manga could be as good as A Silent Voice.

As with Orange, the synopsis didn’t sound that exciting though, which is usually given as something along the lines of ‘deaf girl is bullied by her new classmate but then they get to know each other better’. However, apart from the first 8 pages of a framing narrative, the girl (Nishimiya) doesn’t even appear until page 50. This gives us a lot of space to get acquainted with the compelling character of Shōya, a sixth-grader who (similarly to e.g. Bart Simpson) does evil things without really being evil. Everything he does is motivated by his desire to ‘defeat boredom’ by all means. It’s impossible not to like him when he exclaims, “I declare this day a triumph over boredom!”, and it’s understandable how he immediately sees his new classmate Nishimiya as a remedy for boredom and desperately tries to make use of her to this end.

They way Ōima crafts her story is simple but couldn’t be more effective. By contrasting Nishimiya’s ultimate kindness with Shōya’s ever-increasing meanness while at the same time evoking the reader’s sympathy with Shōya, we experience their conflict as a gut-wrenching lose–lose situation. It can’t get more emotionalising than this. And even though the manga goes on for 6 more volumes, it’s not even all that important whether Nishimiya will ever be able to forgive Shōya – the story as told in vol. 1 is already perfect in itself.

While the script would have been strong enough to work well even if it had been drawn by a lesser artist, the opposite is also true: Ōima could probably illustrate the proverbial phone book and it would still look good. The art of A Silent Voice is absolutely on par with the writing. Of particular ingenuity is the device of repeating panel compositions of certain scenes (Shōya and his mates hanging out in his room, Shōya getting told off by his teacher, Shōya talking at Nishimiya) – not copy-and-pasting but re-drawing them with myriad background details (the amount of which is incredible in many panels anyway) changed. 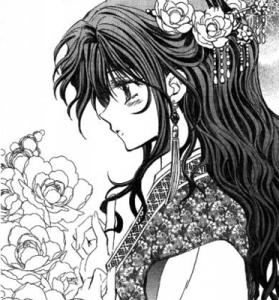 With vol. 1 released in both Germany and the US and vol. 20-22 in Japan last year, plus a popular anime adaptation the year before, I would have thought Yona to be the most talked-about manga of 2016. Instead, I found it on only one best-of-2016 list. Does that mean it’s not actually that good?

Yona is marketed as a fantasy story for the shōjo demographic, which is an interesting niche – although ‘fantasy’ might be somewhat misleading, as there are no supernatural elements (at least in vol. 1), so it’s more of an alternate history story in a vaguely medieval East Asian setting. This genre mix means that the manga has to deliver not only on drama and romance but also on ‘swordplay’. While the drama/romance part works out fine (could there be anything more dramatic than Yona’s father getting killed by the man she is in love with?), the few action scenes seem stiff, especially when compared to manga by masters who appear to feel more at home in the ‘samurai’ genre such as Sanpei Shirato, Gōseki Kojima, or Hiroaki Samura.

Another problem of this volume is its slow pace: at the end, Yona flees from her father’s murderer and embarks on a journey that will surely end in another dramatic confrontation with said killer. It’s palpable that this is the beginning of what will eventually become an epic and probably very exciting and good story – but in vol. 1, we’re simply not there yet.

To sum up, in my humble opinion, A Silent Voice is the best manga of the year 2016. However, there are several other strong ongoing series with which I have yet to catch up to their 2016 volumes, so maybe there’s going to be a third review post later this year.