Due to internet connection problems, The 650-Cent Plague had been on hiatus for some weeks, but now it’s back with another anime-related news item that I just can’t resist to share. In an otherwise serious and sad story, here’s a hilarious detail that doesn’t seem to have been picked up by any other media on the web: last month, the trial of Sascha L. from Northeim (Germany) began, a former supporter of the Islamic State who had built a bomb which he planned to use against German policemen or soldiers. This part of the story is well known and had also been reported in international media (e.g. Washington Post).

The regional daily newspaper, Braunschweiger Zeitung, revealed some details of the court hearing in an article by Johannes Kaufmann in its September 21 issue (not freely available online), including this one (my translation):

By now he [Sascha L.] would have renounced all radical plans, and he would be ready to participate in an opt-out program. Why, then, had he put up a flag of the Islamic State and an oath of allegiance to the ‘caliph’ Abu Bakr al-Baghdadi in his cell, assessor Petra Bock-Hamel wanted to know. ‘I don’t like white walls,’ was Sascha L.’s reply. After speaking to a psychologist he would have actually wanted to take the IS flag down, ‘but then there was Dragon Ball Super on television, and unfortunately I forgot about it.’ Later, judicial officers had photographed the walls of his cell – with flag and oath.

Several things are remarkable about Sascha L.’s statement, but the most striking of all is the way in which it is reported in the newspaper article: no explanation at all is given what “Dragon Ball Super” actually is. As comic experts, we know that it is a current anime series by Akira Toriyama, a sequel to his earlier series Dragon Ball / Dragon Ball Z, and even if we haven’t watched it ourselves, we have some idea what Toriyama’s art style looks like and what the story is about. But how many of the newspaper readers would know? One might have expected at least a gloss in brackets such as “… Dragon Ball Super [a Japanese animated series] on television…”, but no more is said about that subject in the article.

By leaving readers in the dark, Kaufmann relegates the nature of the TV show in question to an unimportant aspect – which it most likely is. But there are probably quite a few readers who wonder: what is this TV program that has the power to distract viewers from important tasks? And is there something about this Dragon Ball Super show that makes it particularly appealing to islamists? Then again, maybe we should be thankful for every moral panic that did not happen. One can all too easily imagine alternative newspaper headlines for the same subject along the lines of: “JAPANESE CARTOON CREATES ISLAMIST BOMBERS”…

This is the second blog post of a series on the occasion of ‘100 Years of Anime’. Read the first post here.

On this day three months ago, the memorial service for Jaden F. was held in Herne, Germany. Jaden had been the first of two victims stabbed to death by Marcel H., whom the media has linked to anime. One German news magazine in particular, Stern (No. 12, March 16), has emphasised the ostensible connections of the murders to anime.

The events were also covered by international media (e.g. Daily Mail, Telegraph, Independent), but none of them even mentioned anime. Therefore, the (thankfully limited and short-lived) ‘moral panic’ regarding anime doesn’t seem to have reached the Anglophone anime blogosphere either, which is why I’ll sum up the story here.

These are the facts: Marcel H. is a 19-year old NEET who had unsuccessfully applied to join the Army in February. On March 6, he lured the nine-year old neighbours’ son into his house and killed him with a knife. Then he went to an acquaintance’s, 22-year old Christopher W., and killed him early in the morning on March 7. Marcel H. stayed at Christopher W.’s apartment until March 9, when he set it on fire, went to a Greek diner, told the owner to call the police, and let himself be arrested.

So far, these events have nothing to do with anime. But Barbara Opitz and Lisa McMinn, the authors of the Stern article, point out the following details: when Marcel H. was arrested at the diner, he carried an umbrella and a bag of onions with him. These items are mentioned in other news articles too, but only Stern offers an explanation, according to which the umbrella and the onions refer to two cards from the Yu-Gi-Oh! Trading Card Game, “Rain of Mercy” and “Glow-Up Bulb” (“Aufblühende Blumenzwiebel” in German; “Zwiebel” can also mean “onion”), respectively. Furthermore, on one of the pictures Marcel posted online on which he poses with a knife, a poster of the anime series Yu-Gi-Oh! GX can be seen in the background. (Interestingly, in the Daily Mail article, the image – pictured below on the right hand side – was altered so that the poster doesn’t refer to Yu-Gi-Oh! anymore.) 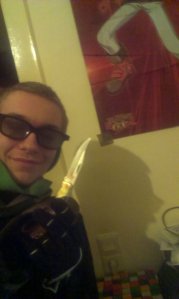 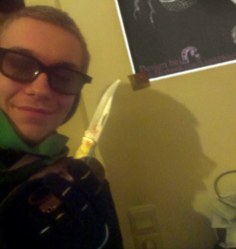 Another connection to Yu-Gi-Oh! is Christopher W., Marcel H.’s second victim, who ran a Yu-Gi-Oh! site on Facebook; apparently they got to know each other through the game and used to play Yu-Gi-Oh! video games together. Finally, Stern points out that there are two characters in the Yu-Gi-Oh! anime with the same first names as Marcel H. and Jaden F.: Yu-Gi-Oh! GX protagonist Jaden Yuki and his antagonist Marcel Bonaparte. Stern implies that Marcel H. identified with the villain and acted out the Yu-Gi-Oh! story by attacking Jaden. The only detail that doesn’t quite fit is that the Stern article also says that Marcel H. had been learning Japanese in order to be able to read manga and watch anime in their original language; in the Japanese original version of Yu-Gi-Oh! GX, however, Jaden is called “Jūdai” and Marcel “Marutan” or “Martin”.

Apart from the Yu-Gi-Oh! connection, there’s not much that links Marcel H. to anime. Some chat messages have surfaced in which Marcel H. talks to another person about the murders at the time when he committed them, and in one message he says, “See you space cowboy”, which indeed is a quote from the anime Cowboy Bebop.

The other things mentioned in the Stern article are rather vague connections to Japan than to anime specifically: at the time of committing the murders, Marcel H. posted a picture of a handwritten note on which he had signed his name in Japanese, and he owned “bamboo swords which he kept under his bed like a treasure. Furthermore a wooden bow and five Japanese ceremonial knives” (all translations mine).

The sad and disturbing thing (apart from the murders themselves, of course) is how Stern chose to focus on Marcel H.’s anime fandom, instead of e.g. his obsession with martial arts, computer games, or 4chan (as other news outlets did, sometimes inaccurately calling it “darknet”). For instance, the entire Stern article is titled, “‘Viel Spaß in der Anime-Welt” (“‘Have Fun in the Anime World'”), which isn’t even a quote by Marcel H. but by his unnamed chat partner. The way in which the Stern authors desperately try to link the content of anime to the murderer is simply journalistically unethical: “‘Space Cowboy’ refers to a character from the anime series, ‘Cowboy Bebob’ [sic], in which a hero says sentences like this one: ‘I don’t go to die, but to find out if I’m still alive.’ Marcel H. is obsessed with the world of anime, Japanese animated films, often dark dystopias, the protagonists have spiky hair and shiny, big eyes. […] the heroes […] are often outsiders, but with hidden powers. Quirky, awkward and at the same time infallible. Outsiders like Marcel H.”

Luckily, the Stern article has failed to start a witch hunt on anime fans like the ones that e.g. video gamers and heavy metal fans have had to endure in past decades. But the article shows that anime has still a long way to go before it can be said to be part of the mainstream.

Earlier this month, Jirō Taniguchi died of an undisclosed illness at the age of only 69. During a career that spanned almost five decades, he authored or co-authored a huge number of manga. However, outside of Japan, only a few of them have earned the recognition they deserve.

One of these oft-overlooked titles is Trouble Is My Business, written by Natsuo Sekikawa. Originally published from 1979–80 (not counting the sequel series), it is Taniguchi’s earliest work available in German. There are also French and Italian editions, but no English one yet as far as I know.

Unlike in many of Taniguchi’s better-known manga, there is little to no autobiographical influence in Trouble Is My Business, except that the protagonist, Fukamachi, is of the same age as Sekikawa and Taniguchi, and lives in Tokyo too. Instead of some contemplative family story, this is a collection of almost straightforward ‘hardboiled’ detective cases which are only loosely connected through the character of Fukamachi and his trouble with his ex-wife and daughter.

Rather than the crime cases and their resolution, the real draw here is the subtle humour which is usually based on the hapless, amateurish, down-and-out, small-time detective protagonist and his interaction with other quirky characters. But let’s focus on Taniguchi’s contribution, the artwork. Because already back then, in his early thirties, he had achieved mastery in draughtsmanship.

That is not to say his style didn’t evolve after Trouble Is My Business. The most noticeable difference to his later works is that he didn’t use screen tone as extensively back then, usually relying on parallel hatching to indicate volume and shadows. This results in an overall darker tonality, which is fitting for the ‘noir-ish’ story. My guess is that the reason for this artistic evolution is rather mundane: perhaps Taniguchi wasn’t yet successful enough to be able to hire an assistant who could take over the time-consuming task of applying the screen tones.

Another difference is the frequent display of his skill at depicting technical objects such as vehicles, watercrafts, or firearms, whereas his (too overtly photo-referenced) cityscapes aren’t as impressive as in his later manga. Something Taniguchi excelled at, back then at least as much as in the 90s, is the portrayal of a vast range of different characters. Each of them has a realistic but distinct look (with the sole exception of the barkeeper at Los Lindos, who looks indistinguishable from Fukamachi).

Recommended for fans of the genre, or anyone who wants to discover a different side of Taniguchi.