The other day I learned through the Comix-Scholars mailing list of the “Mako Mori test”. Devised as an alternative to the Bechdel test and named after a Pacific Rim character, it works like this (quoted from The Daily Dot):

The Mako Mori test is passed if the movie has:

a) at least one female character;

b) who gets her own narrative arc;

c) that is not about supporting a man’s story.

Let’s say a narrative arc in a film is similar to a dramatic arc in drama theory, in that the story builds up to a conflict involving the protagonist (which must be female to pass the Mako Mori test) and then this conflict is resolved. This is already a much simpler definition of an arc than e.g. Gustav Freytag’s five-part model, so it should be easy to find stories – maybe even in comics – that match the Mako Mori test criteria, right?

While a comic may pass the Bechdel test in its first panel, it takes a lot more panels until one can say whether the Mako Mori test is passed. This makes it difficult to apply the Mako Mori test to ongoing serialised comics such as most webcomics, newspaper strips, and monthly comic books. Then again, nowadays comic book writers usually “write for the trade”, so that 6 (give or take 1-2) consecutive issues can be collected in a trade paperback that stands well on its own, in the sense that it contains a complete, self-contained story arc.

There are two ongoing comic book series I’m currently reading that have just reached their sixth issue, so let’s see how they fare in the Mako Mori test.

In the recently re-launched Archie by Mark Waid there are two candidates for female characters with their own narrative arc, Betty Cooper and Veronica Lodge. It’s difficult to place Betty in a narrative structure because of Waid’s unusual storytelling: the big crisis – Archie’s and Betty’s breakup – has already happened in the past, and the comic is about how everyone deals with the aftermath. From the beginning, Betty doesn’t want to get back together with Archie, but still has feelings for him and doesn’t approve of his new relationship with Veronica. Throughout the six issues, nothing happens that changes Betty’s attitude, so I don’t see a narrative arc here. I’m not saying a character needs to undergo drastic changes to constitute a narrative arc, but there’s simply no turning point or climax that the events involving Betty build up to. 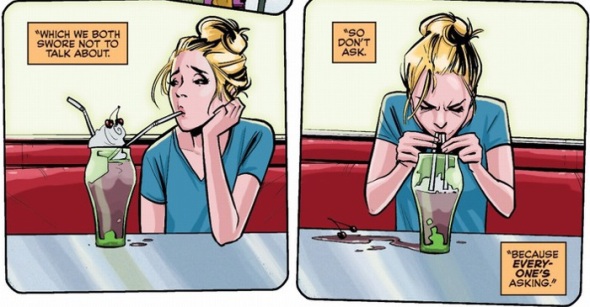 Likewise, there’s no arc structure around Veronica: she faces some challenges when she comes to Riverdale, but a new status quo (dating Archie and more or less fitting in with her other schoolmates) is quickly established. At the end of the sixth issue, a conflict involving her father is set up, but we’ll have to wait and see if this conflict qualifies as a climax of her narrative arc.

Even if Betty and/or Veronica got their own narrative arcs, one would be hard-pressed to argue that these arcs do not support a man’s story and thus fulfil the third Mako Mori criterion. Archie is first and foremost the story of its title character (who even sometimes acts as first-person narrator) and everything that happens is related to him.

JLA by Bryan Hitch is technically already at issue #7, but #5 was a filler issue completely unrelated to the actual story. In the beginning, the Justice League of America fights a supervillain called Parasite, only to be scattered across place/time/dimensions. Then the main plot begins with the Kryptonian god Rao coming to Earth. Meanwhile, Wonder Woman – the eternal token woman in the Justice League, if you will – finds herself on Olympus, which lies in ruins and has been abandoned by the other gods. Somehow Aquaman ends up on Olympus too, and the two fight off an attack by Rao’s prophets. Wonder Woman then rebuilds Olympus and arms Aquaman and herself with the weapons of the gods. 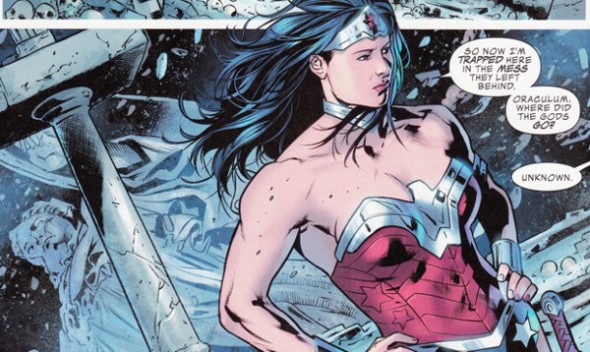 Soon she will be joined by a male companion, though.

It’s too early to say how the final conflict will be resolved and who Wonder Woman is actually up against. Wonder Woman thinks it’s not Rao but “something else”, “something that terrified [the other gods]” (#7). But I still wouldn’t rule out the possibility that Rao and Superman are going to be at the center of this conflict, and if Wonder Woman should merely come to Superman’s aid, her narrative arc would be supporting a man’s story.

However, even though (or precisely because) Wonder Woman doesn’t get much on-panel time in this comic, her portion of the story runs parallel to the others and thus forms something like an independent narrative arc. If we had to pick a “winner”, the “Mako Mori award” would surprisingly go to JLA rather than Archie. Another outcome of this little exercise might be that the Mako Mori test isn’t that great a sexism detector.

Just for the record: Archie passes the Bechdel test in issue #2 or #3, whereas JLA doesn’t pass it at all…

Remember the conference paper I announced on this weblog in 2012? It took some time, but now this paper has been published as an article in Studies in Visual Arts and Communication – an international journal and is available online for free: http://journalonarts.org/wp-content/uploads/2015/01/SVACij-Vol1_No2_2014-delaIGLESIA_Martin-Presence_in_comics.pdf

The term ‘presence’ is often used to denote a trait of an artwork that causes the feeling in a viewer  that a depicted figure is a living being that is really there, although the viewer is aware that this is not actually the case. So far, scholars who have used this term have not explicitly provided criteria for the assessment of the degree of presence in a work of art. However, such criteria are implicitly contained in a number of theoretical texts. Three important criteria for presence appear to be:
1. size – the larger a figure is depicted, the more likely this artwork will instil a feeling of presence.
2. deixis – the more the work is deictically orientated towards the beholder, e.g. if figures seem to look or point at the beholder, the higher the degree of presence.
3. obtrusiveness of medium – if there is a clash of different diegetic levels within an artwork, the degree of presence is reduced.

These criteria can be readily applied to a single image like a painting or a photograph. A comic, however, consists of multiple images, and the presence of each panel is influenced by the panels that surround it by means of contrast and progression. Another typical feature of comics is written text: speech bubbles, captions etc. do not co-exist with the drawings on the same diegetic level, thus betraying the mediality of their panels and reducing their degree of presence. A comic that makes striking use of effects of presence, which makes it a suitable example here, is the superhero series The Ultimates by Mark Millar and Bryan Hitch (Marvel 2002 – 2004). The characters in this comic are often placed on splash pages and/or seemingly address the reader, resulting in a considerable experience of presence.

I’m going to present a paper at the conference Presence and Agency: Rhetoric, Aesthetics and the Experience of Art, which takes place in Leiden from Thursday to Saturday this week. Here’s a very short abstract for my talk:

Presence is the feeling in a viewer that a depicted figure is a living being that is really there. Theoretical literature suggests that the size of the figures and their deictical orientation are the most important factors of presence in single images. Comics, however, consist of a sequence of images, so the degree of presence in a comic panel is influenced by its surrounding panels, either by means of contrast or progression. Another typical feature of comics is written text, which betrays their mediality and consequently decreases presence. The example used here is the superhero comic The Ultimates (Marvel, 2002-2004).

I’ll post further information about this paper and its publication by and by.