Fête de la Musique is a worldwide celebration of (live) music that takes place each year on June 21st. In comics, depictions of music abound, and due to the purely visual nature of the comic medium, comic creators have found a vast variety of ways to represent the auditive medium of music. Here are some random examples from current American comic book series. 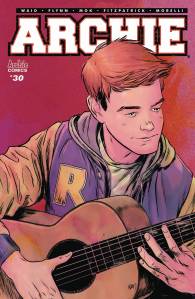 The music: Both the regular cover of #31 and the Adam Gorham variant cover of #30 show Archie Andrews with a guitar, so you can tell already from the outside that music plays a certain role in this comic. In these two issues, the Spring Dance at Riverdale High is on, and Archie – instead of going there with either Betty or Veronica, his perennial love interests – is supposed to play live music there with a backing band. But for various reasons the band doesn’t show up. A replacement is found just in time with Josie and the Pussycats, a band that has its own Archie Comics title but co-exists in the Archie universe. This must be the first time they appear in the main Archie comic though, as Archie is apparently not familiar with them yet.

Despite the frequent occurrence of music in Archie, it’s often depicted unrealistically. The main problem in this particular instance is that Josie and the Pussycats are booked at the last minute, when the event has already begun, but they still seem to perform well with a guitarist and lead singer they have never seen before, let alone rehearsed with. But who knows, maybe “I’ll Never Let You Go”, the song they’re shown performing, is a ubiquitous, easy-to-play standard in the Archie universe, and not the obscure (probably made-up by Waid and Flynn) song it is in the real world. Apart from that, the performing musicians are depicted authentically; even all their instruments are plugged in.

The rest: After some artist shake-ups, a competent team with Mok and Fitzpatrick has been found at last who will hopefully stay around for some time. And even in its third year, Waid’s writing is still rock solid. Except for his tendency to take on big issues and then handle them with a certain heavy-handedness (see also Champions or his current Captain America run): recently it was disability (Betty’s car accident and miraculous recovery), now it’s gun-wielding at a high school. It will be interesting to see how Waid and Flynn resolve this.