The Routledge Companion to Cyberpunk Culture, edited by Anna McFarlane, Graham J. Murphy, and Lars Schmeink, has been published last month. This book contains a chapter co-authored by Lars Schmeink and myself, titled “Akira and Ghost in the Shell (Case Study)”, on pp. 162-168. Rather than discussing the manga, this short text focusses on the theatrical anime versions (Ōtomo 1988, Oshii 1995) and their relation to cyberpunk. (For Akira the manga and cyberpunk, see my earlier journal article in Arts.)

The Routledge Companion to Cyberpunk Culture contains many more chapters of which some deal with comics and anime and might be of interest to readers of this weblog. Follow the link to the publisher’s website for a table of contents. While the printed book is a bit on the pricey side, consider recommending it to your library for acquisition, borrowing it via interlibrary loan, or purchasing the e-book version.

This is the first part of a series of blog posts celebrating 100 Years of Anime. (There is evidence of animated films produced in Japan before 1917, but 1917 the ‘official’ year of birth of anime.) Instead of emphasising that anime and manga are completely different media and whining about how fandom (and sometimes even scholarly discourse) around Japanese popular culture is dominated by anime at the expense of manga, The 650-Cent Plague is going to join in on the celebration and run a couple of posts on anime.

Granted, there are many similarities between anime and manga, but today we’ll look at an aspect that is specific to animation: sakuga. I haven’t seen this term in scholarly literature yet, but there are various fan/journalistic resources online (see e.g. this collection of links) that explain sakuga. These definitions are fuzzy and somewhat contradictory – for instance, some stress the importance of the authorship of individual outstanding key animators while others are based on the number of animated frames per second – but all agree that ‘sakuga’ basically means ‘scenes of extraordinary animation quality’ (as opposed to the overall animation quality of an anime series). ‘Animation quality’ is, of course, another fuzzy term (is it about the amount of labour, ingenuity, or aesthetic effect?), but let’s for once not overtheorise things and instead turn to some examples of what I feel might pass as sakuga.

For many people, Re:ゼロから始める異世界生活 / Re:Zero − Starting Life in Another World (White Fox, dir. Masaharu Watanabe) was the best anime series of 2016. I wouldn’t go as far as that, but it’s definitely an anime series that exemplifies the state of the art of contemporary animation quality, and as such should be a rich source of sakuga. For the following list I’ve picked one sakuga scene from each episode:

Episode 1A, 24:46-25:14 – Emilia summons the ‘lesser spirits’ which are essentially semitransparent blue spheres hovering in different directions, but they also illuminate both background and characters in blue light. Also notice how some of the spheres move in front of the characters and others behind them, so it’s not just one layer placed on top of the image.

Episode 1B, 18:25-18:47 – Rom swings his club against Elsa, accidentally destroying his own furniture along the way. Collapsing structures are a popular motif of sakuga (see the ‘debris’ tag at Sakugabooru).

Episode 2, 16:01-16:05 – The hut into which Subaru crashes is another beautifully collapsing item. 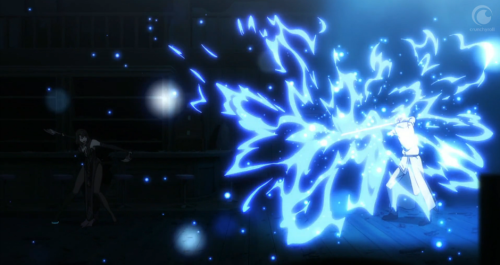 Episode 3, 16:28-17:03 – Reinhard’s impressive sword attack move starts with an effect similar to the ‘lesser spirits’ in Episode 1A followed by a quick succession of various other effects. 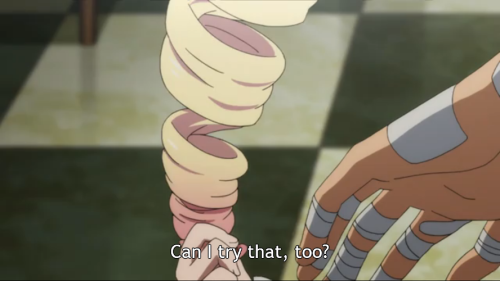 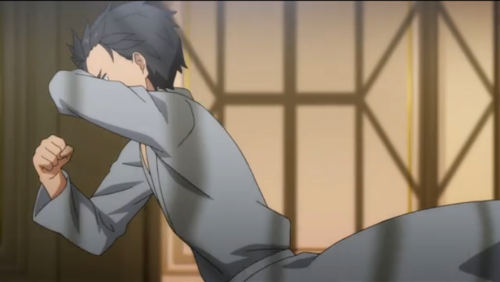 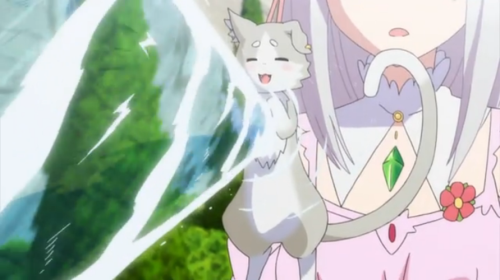 Episode 6, 5:22-5:31 – Puck conjures a jet of water which acts as a semi-transparent layer that twists the background and characters behind it.

Episode 8, 19:43-20:38 – Not so much a matter of animation per se, but the subtle colouring of this scene beautifully evokes the lighting situation at sunset.

Episode 9, 10:09-11:16 – The fire of the torch and the braziers is both a moving semi-transparent layer and a source of lighting. 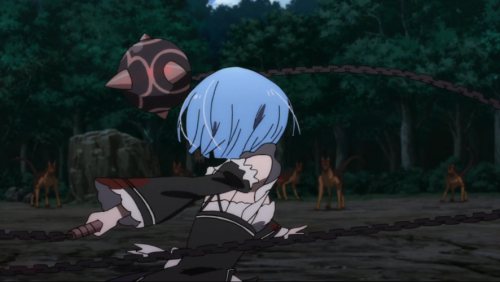 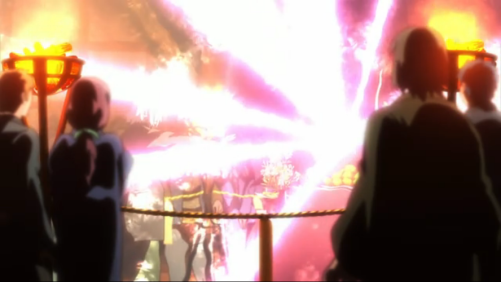 Episode 11, 0:46-0:50 – There are lots of magical special effects in this episode, the most impressive one right at the beginning while the credits still roll: rays of magical light followed by a kind of supernatural whirlwind.

Episode 12, 0:36-0:45 – This one might be hard to see on the still because it’s such a subtle effect: sunlight falls through the trees and creates a pattern of patches of light and shadow on the characters which moves as they walk. 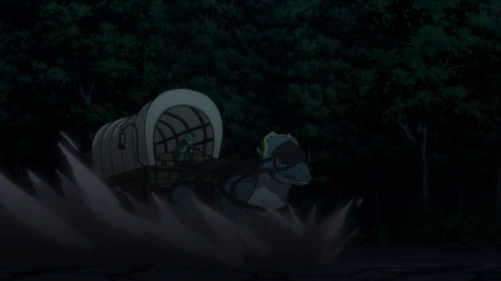 Episode 15, 21:28-23:16 – Many cool things happen in this episode, but it’s particularly famous for its long ending credits scene in which Subaru and Rem are slowly engulfed in an ever-intensifying snowstorm.

Episode 18, 4:12-4:15 – This episode has become legendary in itself due to the long and emotional dialogue between Subaru and Rem. Before that dialogue, however, there is a brief shot of a bowl of apples falling to the ground, in which the objects move not only downward but also ricochet off the floor in different directions, and they even rotate too. 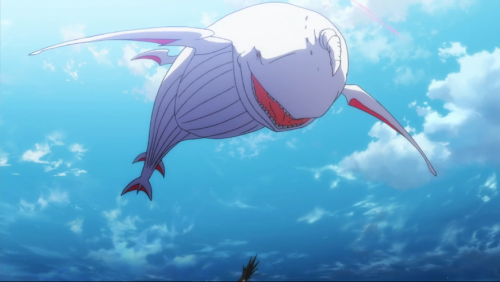 Episode 21, 19:42-19:52 – A backlighting effect employed three times in this episode: the rays of the sun seamlessly connect background to foreground.

Episode 22, 3:50-3:55 – The spatial arrangement of the characters requires them to be moved in three layers as the ‘camera’ revolves around their circle.

Episode 23, 13:28-13:33 – Explosions are a sakuga staple, and this one is a short but impressive combination of fire and smoke. 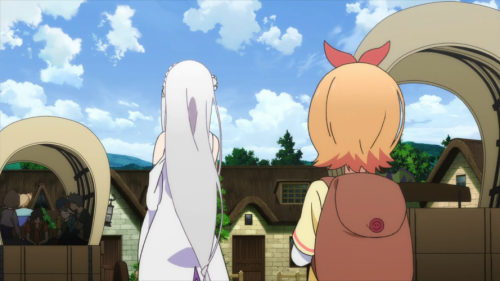 Episode 24, 8:03-8:07 – While the wagon moves diagonally to the left and away from the viewer, the lantern that is attached to it swings sideways. 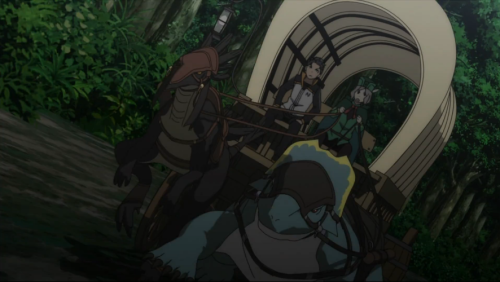 So these are the sakuga scenes I found most impressive in each episode. Did I miss one? Tell me in the comments. Check out the Re:Zero sakuga at Sakugabooru too.

Remember Bartkira, the comic mashup of Akira and The Simpsons (mentioned briefly here one year ago)? Based on this idea, Kaitlin Sullivan, in collaboration with many other artists, has made an animated short film. This fan film adapts the animated Akira film rather than the comic, so we get to see some new scenes and characters not present in Bartkira the comic.