Hime despairs of his male body in Tempest.

In the near future, earth’s entire male population is wiped out by a solar storm – that’s probably the eponymous Tempest (not to be confused with the manga Blast of Tempest / Zetsuen no Tempest). However, the remaining women figure out how to reproduce by hybridising egg cells. Only female children are born this way, until the 40th century, when a boy is born – our protagonist Hime. Trying to fit into this all-female world, he pretends to be a girl. Which goes well until his friend Kou wants to have children with him…
Such a story must be a real treat for anyone interested in gender issues. Homosexuality, social pressure and acceptance, radical feminism, family and reproduction politics, it’s all in there. It’s also interesting from a reception perspective: how easily does the reader “forget” that Hime is a boy? Can it be read as a yuri manga? On the other hand, Tempest doesn’t work well as a science fiction manga. Apart from some advanced data visualisation technology, we don’t see much that tells us we’re in the future at all.
Rating: ● ● ○ ○ ○

There’s also a subplot around photography in Namida Usagi, but that’s quickly forgotten by the 2nd volume.

Ai Minase’s name might ring a bell, as she was an assistant to Arina Tanemura on the classic magical girl manga Kamikaze Kaitō Jeanne. Namida Usagi was off to a good start: in this high school love story, the stereotypical roles of powerless girl and powerful boy are reversed when Momoka, a fairly average girl, falls in love with her reclusive and unpopular classmate Narumi. However, this setup is already revised at the end of the first volume. After the holidays, Narumi returns to school with shorter hair and without glasses, and suddenly he’s popular with all the girls. This makeover (which the author claims to have made by popular demand) ruins the whole manga for me, as it looks like it continues from this point as just another bog-standard romance manga.
Rating: ● ● ○ ○ ○ 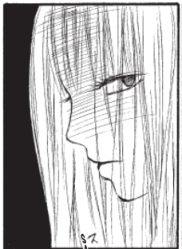 Her classmates avoid 15-year old Sawako because she looks like Sadako from The Ring. The only one who doesn’t find her scary is Kazehaya, the most popular boy in class – but then again, Kazehaya is nice to everyone…
I learned about Namida Usagi through a review in AnimaniA, which said that is was nowhere near as good as Kimi ni todoke. In the end I checked out both series, and AnimaniA was right. Although the character constellation in Kimi ni todoke (shy girl meets popular boy) seems generic at first, the subtle storytelling makes more than up for that. Particularly by the second volume, the focus is more on the girls Sawako tries to become friends with than Kazehaya. In other words, this manga is more about friendship than romance, at least so far. Will this series continue to be as enjoyable over the course of more than 20 volumes? I’m willing to give it a try.
Rating: ● ● ● ● ○