Two years ago, The Routledge Companion to Cyberpunk Culture was published, containing a short chapter by Lars Schmeink and me on the seminal anime films by Katsuhiro Ōtomo and Mamoru Oshii. Lars Schmeink has now put a pre-proof HTML version of that text on his website, and I have uploaded a post-print / accepted version (i.e. without the publisher’s layout) to Humanities Commons where you can read and download it free of charge. Now I can proudly say again that all my publications are available in Open Access.

It already feels good to get a PhD thesis completed and submitted, and defended. But the icing on the cake was to receive the ‘August-Grisebach-Preis’ of the Institute of European Art History at Heidelberg University for one of the two best dissertations of the year! Along with the award came the honour of giving a speech at the semester opening of the Institute in October. Usually such a speech would be a summary of the thesis, but I thought it would be more interesting for both the audience and me if I talked about a different topic (that still is loosely related to that of my thesis).

When I received the news in early August, I was engrossed in the Olympics, and I felt that as an expert on Japanese pop culture, I might have an interesting thing or two to say about the manifold ways in which manga, anime etc. were present at that event. At the same time, I wanted to make some statements about the place of (Japanese) pop culture in (European) Art History, and discipline-specific approaches to it. Perhaps that was a bit of a tall order for a twenty-minute talk, but I’m still happy with the way it turned out, so I decided to translate it into English, add some footnotes and publish it on Humanities Commons: https://hcommons.org/deposits/item/hc:43623

(This also marks the first time that I deposited something on Humanities Commons. So far, I’m very pleased with it.)

Spectators of the 2020/21 Olympic Games were frequently confronted with references to Japanese popular culture, particularly at the opening and closing ceremonies. However, these references to anime, manga, video games and other visual media were often so subtle that they were easy to miss unless pointed out and explained by television commentators. Art historians should not shy away from engaging with such objects and images.

There has been an unusually long silence on this weblog, but for a good reason: two months ago, the evaluation reports for the PhD thesis I had submitted in late August 2020 arrived at long last, and then I had to prepare for my viva voce a.k.a. oral defense a.k.a. disputatio – which I passed on June 30. Hooray! (Or should I say, yatta!)

However, my journey towards a PhD is far from over, as I still need to turn the thesis into a book. I’m already negotiating a deal with a publisher, and when the book is available I’ll make sure to advertise it here. In the meantime, regular blogging (at approximately 1 post per month) will resume shortly, so stay tuned.

The latest issue of Closure. Kieler e-Journal für Comicforschung contains a special section on “Eco-comics” to which I contributed one of its four articles. According to the issue introduction,

Martin de la Iglesia’s »Formal Characteristics of Animal Liberation in Comics«, which closes the special section, shares with the preceding articles a concern with the comics form. Particularly, de la Iglesia investigates if comics associate the specific scenario of animal liberation with a formal correlative – and if the comics form is geared towards a presentation of »animal communication and perception« (91) at all. And indeed: some commonalities emerge from the analysis of open cages, sudden flight, and abject suffering in Animal Man, Daredevil, We3, and Pride of Baghdad. In its detailed close readings and search for an overarching graphic rhetoric of liberation, the article pays particular attention to the ›expressive‹ potential of comics devices and the degree to which observers alternately share and are distanced from animal minds.

Read my article “Formal Characteristics of Animal Liberation in Comics” for free in HTML or PDF.

PhD thesis “The Early Reception of Manga in the West” submitted! 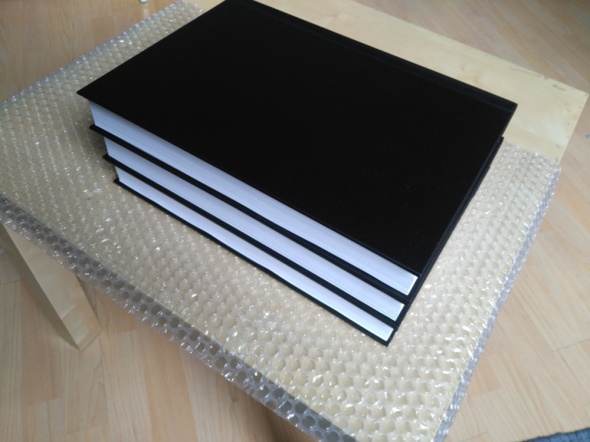 These are three copies of the thesis, mind you. It doesn’t span three volumes!

After many long years in which there seemed to be hardly any progress at all, my dissertation about English and German manga translations in the late 1980s and early 90s is now completed. Last week I submitted it to Heidelberg University.

When I started this weblog in 2012, I had thought it was going to be a ‘watch a PhD thesis grow’ type of journal, but I quickly abandoned that idea and blogged about all kinds of other things instead. So even if my journey towards a PhD is slowly but surely coming to its end, The 650-Cent Plague isn’t going away. Regular readers might have noticed that the posting frequency has recently slowed down from two posts per month to one. Nevertheless, I still enjoy writing these blogposts and I’m already looking forward to the next instalments of the regular series, such as the horror manga review for Halloween, the year-end best-of list in December, the Women’s History Month theory post in March, and the Warren Ellis politics post on May 1.

Plus, if and when my PhD thesis gets turned into a book, rest assured that you’ll read about it here.

The Routledge Companion to Cyberpunk Culture, edited by Anna McFarlane, Graham J. Murphy, and Lars Schmeink, has been published last month. This book contains a chapter co-authored by Lars Schmeink and myself, titled “Akira and Ghost in the Shell (Case Study)”, on pp. 162-168. Rather than discussing the manga, this short text focusses on the theatrical anime versions (Ōtomo 1988, Oshii 1995) and their relation to cyberpunk. (For Akira the manga and cyberpunk, see my earlier journal article in Arts.)

The Routledge Companion to Cyberpunk Culture contains many more chapters of which some deal with comics and anime and might be of interest to readers of this weblog. Follow the link to the publisher’s website for a table of contents. While the printed book is a bit on the pricey side, consider recommending it to your library for acquisition, borrowing it via interlibrary loan, or purchasing the e-book version.

I’m conducting a short poll on manga readership outside of Japan (primarily in English-speaking countries) before 1994. If you have read any manga back then, please take a minute (or five, but it probably won’t take longer) to participate: https://forms.gle/UFmaXR35mrBxPE97A

Please note that there is a German version with different reply options; residents of German-speaking countries who have read manga before 1997 are asked to use this one: https://forms.gle/syHfF1Ew1CukdXAy7

November is Wikipedia Asian Month. Each year, Wikipedians are invited to write new articles relating to any aspect of Asia. Depending on the number of articles you manage to create within this month, you are awarded bronze, silver and gold virtual badges (though that might be specific to the German Wikipedia), and anyone who creates at least 4 articles gets a postcard (by snail mail!) from a random Asian country.

If you’re reading this weblog, chances are you’re particularly knowledgeable about manga, so how about participating in Wikipedia Asian Month by checking if there’s any manga or mangaka not yet in the Wikipedia of your choice (but should be)? However, there are two caveats:

Paper “Japanese Art in the Contact Zone: Between Orientalism and ‘Japansplaining’” published

More than two years ago, I gave a conference paper titled “Japanese Art in the Contact Zone: Between Orientalism and ‘Japansplaining’”. The proceedings of this conference, Migrations in Visual Art, have now been published as an Open Access PDF at https://e-knjige.ff.uni-lj.si/znanstvena-zalozba/catalog/book/122 (doi: 10.4312/9789610601166, ISBN: 978-961-06-0116-6). There you’ll also find a table of contents with links to the PDFs of the individual papers. Again, this paper isn’t about comics, but I dare say it’s relevant to anyone interested in transnational manga reception. Here’s the abstract as published in the proceedings:

After WWII, Japan came to be economically and politically at eye level with its
former enemy nations. Therefore, one cannot say that the Western reception of
Japanese artworks takes place within an actual context of an asymmetrical power
relation. Yet, European and American audiences often approach Japanese art from
a position of perceived superiority. Overt and subtle traces of this attitude can be
detected in reviews and other texts on Japanese artworks ranging from the films of
Akira Kurosawa to the photographs of Nobuyoshi Araki.

Article “Has Akira Always Been a Cyberpunk Comic?” published

Earlier this year I gave a talk at MSU Comics Forum, and now a journal article based on that talk has already been published:

Between the late 1980s and early 1990s, interest in the cyberpunk genre peaked in the Western world, perhaps most evidently when Terminator 2: Judgment Day became the highest-grossing film of 1991. It has been argued that the translation of Katsuhiro Ōtomo’s manga Akira into several European languages at just that time (into English beginning in 1988, into French, Italian, and Spanish beginning in 1990, and into German beginning in 1991) was no coincidence. In hindsight, cyberpunk tropes are easily identified in Akira to the extent that it is nowadays widely regarded as a classic cyberpunk comic. But has this always been the case? When Akira was first published in America and Europe, did readers see it as part of a wave of cyberpunk fiction? Did they draw the connections to previous works of the cyberpunk genre across different media that today seem obvious? In this paper, magazine reviews of Akira in English and German from the time when it first came out in these languages will be analysed in order to gauge the past readers’ genre awareness. The attribution of the cyberpunk label to Akira competed with others such as the post-apocalyptic, or science fiction in general. Alternatively, Akira was sometimes regarded as an exceptional, novel work that transcended genre boundaries. In contrast, reviewers of the Akira anime adaptation, which was released at roughly the same time as the manga in the West (1989 in Germany and the United States), more readily drew comparisons to other cyberpunk films such as Blade Runner.

Fun fact: this is my 10th publication (not counting reviews, translations, and articles related to my library ‘day job’)! Find them all here: https://www.bibsonomy.org/cv/user/iglesia