For Japan, the 2010s were marked by a historic event at the beginning of the decade: the Tōhoku earthquake and tsunami on March 11, 2011, and the ensuing nuclear accident at the Fukushima Daiichi power plant. It’s somewhat surprising that there haven’t been many more manga on this topic, although I bet a lot of manga critics are going to interpret pretty much any manga published afterwards as somehow inspired by the triple disaster, just as they did with the Hiroshima nuclear bombing. Apart from 1F, the other big ‘3.11’ manga is Daisy, created in 2012 but not published in German until 2016 (and not yet available in English as far as I know). 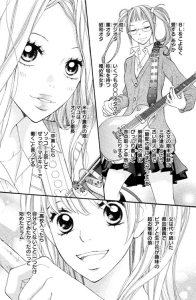 On the one hand, Daisy – full title in German: Daisy aus Fukushima (“Daisy from Fukushima”) – is a typical shōjo manga about a group of friends in their last year of high school: Ayaka, Moe, Mayu, and narrator Fumi play in a band, fall in love with boys, worry about which career to pursue after graduation, quarrel and reconcile again. On the other hand, they live in Fukushima-shi (Fukushima City), and after that fateful 11th March their lives are affected in many ways.

Even though Fukushima-shi is well outside of the evacuation zone, radioactivity has become a constant threat. It keeps guests from staying at Ayaka’s parents’ hotel, it deters customers from buying rice from Mayu’s father’s farm, and it makes Moe abandon her home town. Before the disaster, Fumi’s plan had been to go away to Tokyo to university, but now she wonders if leaving Fukushima at this time would make her a traitor. 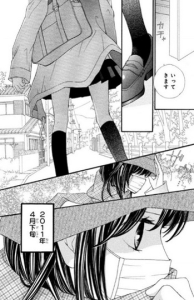 It’s quite a feat of this manga to make this peculiar feeling palpable; these effects of the disaster that are much more subtle than radiation poisoning; this creeping fear of an invisible danger that is so unlike the blind panic of people running from a tidal wave. Daisy is similar to 1F in this regard: they both don’t show how the tsunami hits the coast or how reactors explode, and both focus on characters from outside of the evacuation zone – the main difference, of course, being that the ones in Daisy are fictional.

When talking about the manga of the 2010s, Daisy is definitely one to rank among the most representative of this decade.