The best manga of 2016? Review of Wolf Girl & Black Prince

Now that the Reiwa era has begun, some people are compiling lists of the best manga from the Heisei era, even though 1989–2019 seems like a ridiculously long time to do so, and comparisons to the previous Shōwa era (1926–1989) are difficult due to their different lengths. However, towards the end of this year, lots of people are going to wonder what the best manga of the 2010s were, and then it will come in handy that we’ve taken an in-depth look at manga from the middle of this decade (technically speaking its 7th year) in this series of blogposts. 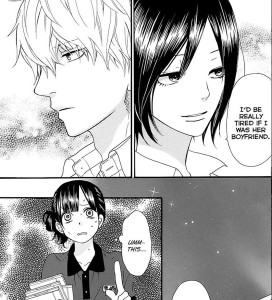 Even people who usually don’t read romance/shōjo stories seem to like this manga (and/or its anime adaptation). For some reason, though, apparently it has never been published in English. In 2016, the final two volumes came out in Japan, but in Germany, that year saw the publication of vols. 6-11, which is why I’ll deal with vol. 11 here.

Previously in Wolf Girl & Black Prince: in order to remain popular among her friends, 17-year old Erika pretends that her attractive classmate Kyōya is her boyfriend. She secretly begs him to play along so that her friends don’t find out that they’re not actually dating. He agrees to act as if they were a couple, but in private he is mean to her. In the end, however, they fall in love with each other and begin an actual relationship.

And that is the plot of about the first three volumes. The series could have ended there, but like with so many other long-running manga, the cash cow wasn’t dry yet. In the case of Wolf Girl & Black Prince, 13 more volumes followed which tell us of the romantic life of Erika and Kyōya, and of course their large cast of friends. In this eleventh volume, for instance, the first chapter is about Erika falling ill and Kyōya reluctantly caring for her, while the second and third chapters deal with romantic rivals (a co-worker at Erika’s job and a classmate who gets closer to Kyōya).

That isn’t to say that these ‘middle volumes’ are entirely without appeal. There are still moments in which Erika and Kyōya come across as compelling characters – she continues to be slightly selfish but also masochistic, he remains cool and distant. What really sets Wolf Girl & Black Prince apart from many other shōjo manga is its relatively mature content. For instance, the characters talk almost openly about sex (and also sometimes explicitly use that word), though sexual acts are never depicted.

One could probably say a lot about this manga from a gender perspective. The way in which Kyōya (“I’m going to steal your virginity!”) treats Erika, and the way in which Erika lets herself be treated by him, makes it clear that we’re not exactly reading a feminist manifesto here.

Another thing worth mentioning is that most volumes (at least in this Kazé edition) contain bonus stories. These can be spin-off stories from the main one, or unrelated one-shots. In the case of vol. 11, it’s a 38-page one-shot high school love story. On the flipside, though, this means that you only get 130 pages of the main story.

The artwork is of an extremely high quality and, in accordance with the humorous tone of this manga, is full of charming cartoonish characters. Too bad the story has lost its drive long ago and seems to go nowhere. Otherwise Wolf Girl & Black Prince would have indeed been one of the best manga of 2016.

One Comment on “The best manga of 2016? Review of Wolf Girl & Black Prince”