← Manga reviews, Halloween 2018 edition: Ajin, I Am a Hero, Uzumaki
Paper “Japanese Art in the Contact Zone: Between Orientalism and ‘Japansplaining’” published → 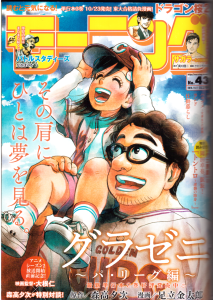 Two years ago I already introduced another original Japanese manga magazine here, Weekly Young Jump, but I don’t want to give the impression that all manga magazines in Japan are like that. So here’s a look at a magazine that is also filed under seinen (i.e. targeted towards young adult men), but much more mature.

Morning (or “Weekly Morning” according to Wikipedia, but the word “Morning” [EDIT: I mean “Weekly”, of course] is not on the cover as far as I have seen) is not quite as widely read as Young Jump, but its circulation (well over 100,000 copies per issue) is still huge compared to Western comic magazines. In the past, Morning has run famous manga series such as Gon, Planetes, Space Brothers, and Vagabond.

Which brings us to the manga in this issue. There are roughly 20 chapters of 18 pages on average, and these are the more noteworthy ones apart from Gurazeni:

As you can perhaps see from these short descriptions, most of the manga in Morning are set in the real world rather than some fantasy or science fiction setting. Considering Morning and Young Jump alone, the vast variety of manga within the seinen demographic becomes palpable – a variety hardly represented by the few of these titles that have been published in the West.