This year’s Biennale is once again a spectacular art show and, like the 2013 Biennale, counts a famous comic artist among its participants (see below). It is still open until November 26. These are all the sequential artworks I’ve seen there: 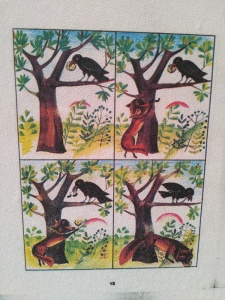 At the Central Pavilion in the Giardini, Kosovan artist Petrit Halilaj has made a wallpaper (ABETARE, 2015) out of his old Albanian alphabet book. On some pages it contained picture stories such as this one of the fable of the fox and the crow. 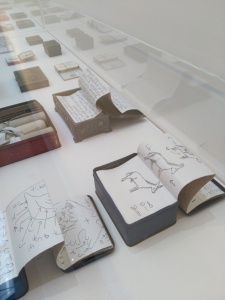 Abdullah Al Saadi keeps Diaries (2016) in the form of leporellos stored in metal boxes, ostensibly inspired by the Dead Sea Scrolls. Some of his notes contain possibly sequential images. 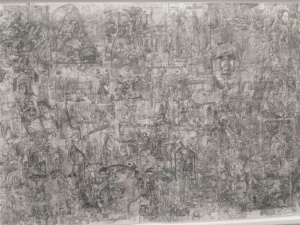 In his All Images from… series (2015), Ciprian Mureşan copies pictures from books – monographs of painters such as Correggio or Giotto, or museum catalogues – on a single sheet of paper, thus juxtaposing (and overlaying) formerly separate images. It would be interesting to find out if the arrangement on the sheet of paper corresponds to the sequence of pictures in the book, or to the order in which Mureşan drew them. 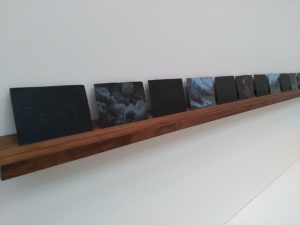 Our Naufrage 1-10 (2014) by Hajra Waheed apparently tells the story of a shipwreck of migrants. Maybe this arrangement of the paintings on a shelf is already sufficient to speak of juxtaposed sequential images.

Some of the exhibited works were rather old, such as this sequence of photographs taken by János Vető of a performance by Tibor Hajas from 1978. 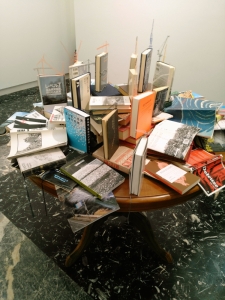 At the national pavilions in the Giardini, we find a work that isn’t sequential itself but includes an actual comic: in Takahiro Iwasaki‘s Tectonic Model (Flow) from 2017 at the Japanese pavilion, one of the books is a copy of the second volume of Katsuhiro Ōtomo’s Akira. 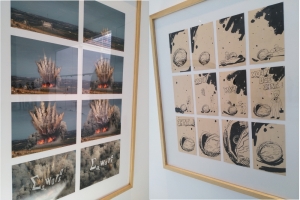 At the Hungarian pavilion, these two sequences by Gyula Várnai are meant to be part of the same work, E-Wars. One shows photographs of an ISIS missile attack overlaid with a mathematical formula supposed to represent an “algorithm also used by Google to collect user information” (pavilion leaflet). The other sequence adapts the animated opening of the Soviet children’s science television show Хочу всё знать (“I Want to Know Everything”). 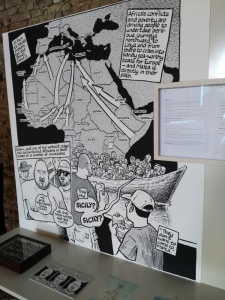 At the Arsenale, we find works by the only famous cartoonist at the Biennale: excerpts from The Unwanted (2010) by Joe Sacco, mounted on large boards, arranged with some other artworks, and dispersed throughout the room that accommodates the national contribution of his native Malta. I’m not sure if reproductions of a rather old comic displayed in this way contribute to the acceptance of comics into the world of ‘high art’, but maybe it’s better than nothing. The whole story can be read at The Virginia Quarterly Review where it was first published. There you can see how entire panels were cut off from the page as displayed at the Biennale, pictured above.

Jean Boghossian‘s exhibition at the Armenian pavilion is distributed between Palazzo Ca’Zenobio and Santa Croce degli Armeni. At both sites, his Livres brûlés can be seen (and one even flipped through) – paper objects with marks made by fire. 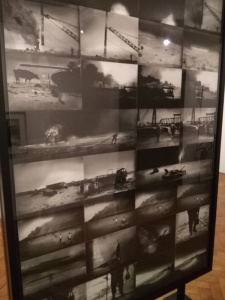 It’s no coincidence that the drawings by Radenko Milak at the Bosnian pavilion look like film stills, as he also directed an animated film which can be seen as well at Palazzo Malipiero. 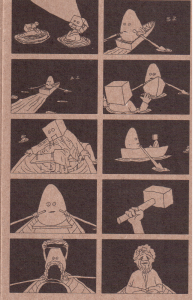 EDIT: I just remembered there’s one more comic. While The Aalto Natives by Nathaniel Mellors and Erkka Nissinen at the Finnish pavilion is an animatronics installation, the pavilion leaflet contains this one-page wordless comic which sums up the plot of the installation.

One Comment on “Sequential art at the 57th Venice Art Biennale, 2017”