Halloween is around the corner again, and that means reviews of recent and classic horror manga here at The 650-Cent Plague. Today’s three titles show once more how diverse this genre is, and that there are manifold (maybe even medium-specific?) ways for comics to elicit fear from their readers. 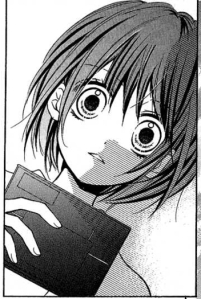 A horror manga for the shōjo demographic, can this possibly work? Well, it sure did scare the bejesus out of me – this is definitely the most frightening manga of the ones I’ve reviewed so far. Each chapter is a self-contained episode with a different cast of characters, only loosely held together by a framing narrative with a Crypt-Keeper-like narrator. All stories mostly take place at school (hence the “Lessons” part of the title) and have middle-school girl protagonists who are concerned with the usual things: boys, clothes, mobile phones, puppies, classmates… Each protagonist wants something, but when she gets it, it goes terribly wrong. In the first episode, for instance, a girl desperately wants a handheld gaming console, finds an abandoned one on the street and keeps it, but it turns out to be cursed and the game on it seems to affect people in the real world, even causing their death.

While death and violence do occur in this manga, they aren’t depicted that explicitly. In another episode, a girl is hit in the face by glass shards, but only her body from the chin down is shown in that panel. Still, I’m not sure if this manga is suitable reading material for readers of the same age as the middle school protagonists.

Another similarity to EC horror comics is the moralising and the gleeful twist ending in most episodes: our heroines eventually become aware of their vices and the mistakes they’ve made and resolve to behave better in the future. But often it’s already too late and they have to pay for what they’ve done.

Due to their self-contained nature, the individual stories are fast-paced and lack subtlety, but otherwise this first volume is a finely crafted manga, though I’m not sure if the suspense can be kept up for the remaining 19 (!) volumes.

Scariest moment in vol. 1: at the end of the fourth episode, when our young protagonist goes home and thinks she’s safe, only to find the killer is already waiting for her there.

Protagonist Yū is a high school student who plays a mobile game called “Rabbit Doubt” which is based on “Mafia” a.k.a. “Werewolf” a.k.a. “Murder in Palermo”. In the beginning of the manga, he meets his five fellow players face to face for the first time and becomes friends with them. Then, however, the game turns into deadly reality when they are abducted and one of them murdered.

The plot shifts into more of an escape room / Fermat’s Room kind of setting when the kids explore their prison and are confronted with puzzles such as locked doors and corresponding keys, all the while suspecting that one of them is in fact the abductor rather than a victim. Like with Death Note and other similar manga, the author unfortunately doesn’t have much faith in the initially simple but intriguing premise (in this case, the “Mafia” game) and keeps adding more and more elements, characters and game rules in an attempt to stretch out the story.

Although Doubt (and its sequel, Judge) has found a place in some ‘best horror manga‘ lists, it has more of a mystery / detective thriller vibe to it because Tonogai takes great care to present all facts and details of the setting in great clarity to the readers so that they can guess along with the characters who the killer is. Which is a shame, because the first 50 pages set quite a different, subtle and atmospheric mood, which is then abandoned in favor of a still suspenseful but more ‘economic’ storytelling.

Scariest moment in vol. 1: when a guy believed to be dead suddenly comes alive again. 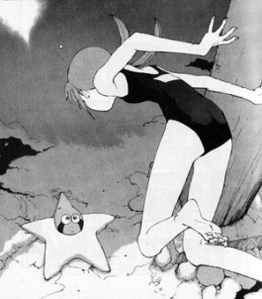 While swimming during her summer vacation, eleven-year-old Shiina finds a cuddly little alien on the bottom of the sea. The alien, Hoshimaru, can’t talk but has supernatural powers such as flying. An E.T.-like friendship begins. But then Shiina meets other children who also have alien companions, some of which are using their powers for sinister purposes.

Naru Taru has a reputation for starting harmlessly and then turning dark, deconstructing various shōnen manga tropes along the way and thwarting readers’ expectations. Some label it a horror manga, but I’ve just finished vol. 2 and at this point it’s more supernatural thriller than horror, although it’s hard to say which direction the story will take. From what I’ve read about the series, things are about to get darker still. Chances are that I won’t find out anytime soon, because the later volumes in particular are hard to find at reasonable prices.

Apart from this genre-wise ambiguous story, what makes this manga stand out is Mohiro Kitō’s art. As in his previous manga, Wings of Vendémiaire, there are many weird design ideas, but the true charm lies in how he depicts his characters and objects: from all angles, employing a real 360° ‘camera’, not shying away from daring foreshortenings.

Scariest moment in vol. 1: when another girl, Akira, quietly slits her wrists with a razor, it’s creepier than all the supernatural fighty-fighty before.