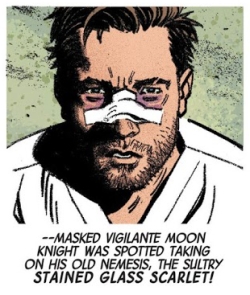 Previously in Moon Knight: No idea what happened at the end of the previous series, because I dropped it when Warren Ellis left after only six issues. (Maybe I should have stuck to it, because it turns out Greg Smallwood’s artwork is almost as striking as Declan Shalvey’s who left the book shortly after Ellis…)

One of Moon Knight’s/Marc Spector’s defining characteristics is his precarious mental health, so it makes sense for Jeff Lemire to start the story with Marc being a patient – or should we say ‘inmate’? – in a mental hospital. Marc has these memories about being Moon Knight, but none about how he got there, and the hospital psychiatrist tells him that he has been there since he was twelve years old. Then again, he has these visions of his Egyptian patron deity, Khonshu, which suggest to him that the hospital staff are in fact other, evil Egyptian mythological beings.

Mental asylum break stories (if that’s a thing) are powerful when they manage to convey the feeling of despair in the protagonist: he or she is the only one who knows what’s really going on, but everyone else thinks he or she is just crazy (think Terminator 2: Judgment Day). This Moon Knight series adds the thrill of leaving the reader in the dark, at least initially, about which is the truth and which is Marc’s imagination: we are shown both the hospital staff and, alternately, the Egyptian gods, but only one of the two can be real (think David Cronenberg’s Spider).

One of the few things in which Ellis didn’t succeed in his run was the handling of Moon Knight’s backstory. Lemire achieves this by including several of Moon Knight’s supporting cast, and by putting more emphasis on his different personas (the millionaire, the taxi driver). 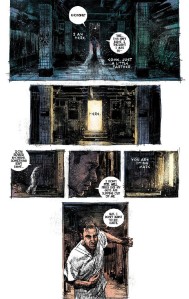 And then there’s the art. Often there are only few panels on a page, of different size and horizontally centered so that there is a lot of white space, giving a massive, iconic, grave and simply powerful impression. Some guest artists were involved in issue #5, which makes sense because each draws a different scene in a dream (?) sequence. Alas, from the solicitations it looks like Smallwood leaves the series after #6.

If there’s one thing I don’t like about this Moon Knight, it’s that the Egyptian gods often don’t talk like one would expect gods to talk, thus appearing less awe-inspiring than they could be. Granted, deities in the Marvel Universe are more mundane beings than the omnipotent gods from ‘real’ mythological tradition, but still…

All things considered, this might indeed be the best Moon Knight series ever, and (together with The Vision) the best Marvel book right now.