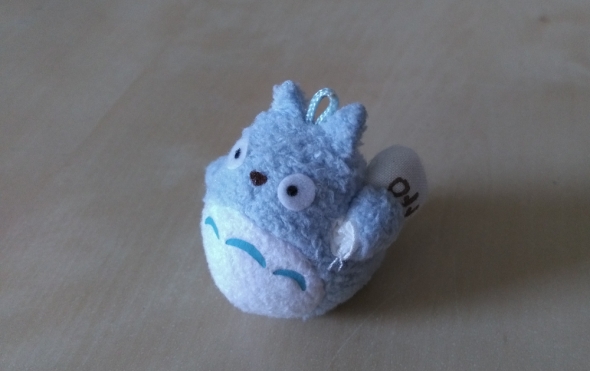 This fellow here is ‘Chū Totoro’ / ‘Middle Totoro’, or ‘Blue Totoro’, one of (Big) Totoro’s two little helpers from Hayao Miyazaki’s anime classic となりのトトロ / My Neighbor Totoro. In this incarnation, Chū Totoro is a 4.5 cm tall plush figure. It comes with a chain to be used as a mobile phone strap charm or keychain pendant.

The interesting thing about it is, it was sold in a small department store in Ōsaka along with other merchandise, such as pencil cases or towels, of Mickey Mouse, Donald Duck, Tigger from Winnie-the-Pooh and other characters. All three of said characters are from multi-media franchises: people who buy their merchandise might know them from a television series, a comic, an animated film, or a novel. Or they might not even know where they know them from. Some characters become more popular through their merchandise than through narrative media, even if the publication of the latter precedes the former.

Take Snoopy, for instance: countless children all over the world probably have a Snoopy T-shirt or a Snoopy eraser without ever having read the Peanuts comic or watched the animated films. While we (as scholars of Japanese popular culture, or students of anime, or international ‘otaku‘) naturally trace back the Totoro characters to a single work, the aforementioned My Neighbor Totoro anime, maybe it’s different for children in Japan. For them, Totoro might be another Snoopy, as it were, who has simply always been there.