← R.I.P. The New 52: a look back at Justice League Dark
Bartkira the animated trailer → 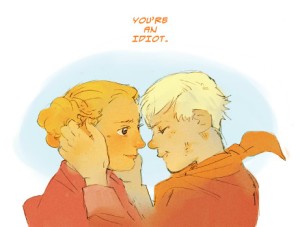 A nice rendition of the protagonsits, Lono and Pira, by Rachel Saunders in the online version. Interestingly, this scene is missing from the printed book.

Sometimes, it takes little to make a good print comic out of a good web comic (e.g. Robin Vehrs’s Western Touch/Enjambements, reviewed on this weblog). Spera was a good web comic, too, and when its print publication was announced, I was looking forward to it. The concept of Spera was crazy, in a good way: the entire script was written by Josh Tierney, but every 3-8 pages (some of which have large “infinite canvas”-like layouts) the artist would change.

Over 40 artists contributed back then, which resulted in a variety of styles, and also in vastly different levels of quality. Sometimes you couldn’t even figure out what was going on in the illustrations if you hadn’t read Tierney’s synopsis at the start of each section. For the print version, it looks like Tierney (or his editors at Archaia?) wanted to have more consistent art, so the same script is now illustrated by only four artists: Kyla Vanderklugt, Hwei, recent Eisner Award winner Emily Carroll, and Olivier Pichard. Don’t get me wrong, all four of them are superb artists, and on average, the art is probably better in the book than in the web comic.

However, this printed Spera is no longer a bold experiment in comic-making. It’s just a run-of-the-mill fantasy story. The only element in the story that some readers will find interesting is the gender-bending aspect. Furthermore, the dialogue is often awkward and clumsy (“I want to be my own person, exploring secret dungeons and caves. I want to find things made out of gold and silver and trade them for cool weapons”).

On the other hand, the book is designed beautifully as a heavy hard cover volume with golden ornaments on the cover, a map printed on the endpapers, and other nice touches (but still reasonably priced). That’s one advantage over the online version. Still, overall I’m disappointed of how this book turned out, and I probably won’t read any of the following volumes (three to date). If only they had given this book another title, “Spera Reloaded” or something like that…