In my PhD research I don’t deal with 21st century reception of Akira, but recently I’ve come across some interesting adaptation projects which I wanted to share here, just in case you haven’t heard about them already:

A three-minute fan-made “trailer” for a live-action film that doesn’t exist (i.e. not the one that was recently announced to be at the scriptwriting stage).

An elaborate video of a performance of the anime soundtrack.

A faithful panel-by-panel remake of the manga – except all original characters have been replaced by Simpsons characters. 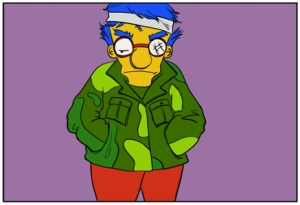