Last week I visited the Biennale di Venezia, which still runs until November 24th. There seem to be far more comics-related artworks there than at the documenta last year, possibly due to this year’s topic of the Biennale, “The Encyclopedic Palace”. Here are some that caught my eye (click on images to enlarge):

At the Arsenale, one of the two central exhibition spaces, the first work that bears some resemblance to comics is Yüksel Arslan‘s series of drawings. Most of them are from the 1960s and 80s already. They are quite enigmatic, but at least some of them seem to be arranged in sequences on the same sheet, not unlike panels in a comic.

Then there’s Robert Crumb, of course. The inclusion of his Genesis isn’t that much of a sensation, as his work was exhibited at art museums before. Furthermore, the display at the Biennale (all of the original drawings in a long row) didn’t invite people to read much of it. Still, it’s good to see a proper comic at such an art show.

Comics theory usually negates the role of writing (as in script) in order to account for wordless comics. The drawings of Matt Mullican might pose a challenge to that point of view, as they consist of letters and numbers only. At the same time, they can also be regarded as images, which form deliberate sequences. 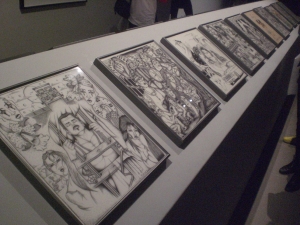 Some of the paño (“cloth”) drawings by Mexican American prisoners seem to tell a story in several distinct images, even though there are no panel borders. The order of the images and the overall story remain somewhat vague.

This photo book in the Georgian pavilion documents a performance. But is this photo comic a work of art in itself, or just a medium of the actual artwork, the performance? The same doubts apply to the photographs documenting Fabio Mauri’s performance Ideologia e Natura at the Italian pavilion (not pictured, but see the installation view here or here (websites in Italian)).

Carl Gustav Jung is better known as a psychoanalyst, but as his Red Book shows, he was also an accomplished artist. Some of the drawings are abstract, some figurative, some are combined with text and some are not. And some of them undoubtedly are connected to sequences. In this case it is a pity that not all of the pages are exhibited, as it is hard to figure out the narrative by reading only the short segments on display. 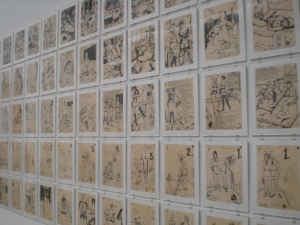 Finally, mounted on a large wall are the erotic drawings made by the teenager Evgenij Kozlov in Leningrad in the 1960s and 70s. Some of them form little stories extending over several sheets. There’s also some writing on them, albeit in Russian. Regardless of what one might think of their individual quality, the inclusion of such older works (also Jung’s, Mauri’s, Arslan’s and others) in a contemporary art show strikes me as a condescending rather than reverential gesture. It’s a gesture that basically says: these works are only worthy to be exhibited because of their age, out of historical interest. But it’s not as if there wasn’t enough good and interesting art produced today that could have been exhibited instead, as the rest of the Biennale amply proves.

3 Comments on “Sequential art at the 55th Venice Biennale”