In 1983, the same year in which her book The Art of Describing came out, Svetlana Alpers published an interesting essay in the journal Representations, titled “Interpretation without Representation, or, the Viewing of Las Meninas”. In this article, she describes “two modes of representation that are central in Western art” (i.e. pictorial art, primarily figurative painting). Basically, these modes are specific constellations of perspectival, deictical and above all diegetic dispositions.

A picture in the first mode – the “Albertian” mode, after Leon Battista Alberti – “is conceived to be like a window on the perceived world”. That is, the recipient is aware that the picture was made by an artist, and from a particular point of view. Thus, the recipient in front of the picture takes on the same position as the artist when he or she beheld the scene that would become the subject of the picture. (In contrast, Alpers writes that “the artist positions himself on the viewer’s side of the picture surface”, but I’m describing things from the reception side here.) Cues for this mode can be artificial compositions of objects framed to be painted, such as a sitter posing for a portrait, or objects which appear to have related to the artist in some way, such as a figure seemingly looking at the beholder/artist.

The second mode of representation – “the northern or descriptive mode” – is characterised by the perceived absence of the artist. The picture looks as if “the world produces its own image”, a “replicative image”. Such a picture “does not assume the existence of viewers prior to and external to it”, but it may contain “a figure situated as a looker within” who does not appear to look out of the picture, or at least not towards the position of the artist/viewer. In a way, such a device is similar to Michael Fried‘s concept of absorption.

For Alpers, the choice of mode is a meaningful and almost ideological one. The Albertian mode betrays a “commanding attitude toward the world”, whereas in the descriptive mode, “the world seen has priority”. In other words, “the artist of the first kind claims that ‘I see the world’ while that of the second shows rather that the world is ‘being seen.'”

Does it make sense to look for these representational modes in multi-image works such as comics? It might, if we assess the mode for individual images and then extrapolate to determine the predominant mode of the work as a whole. In Alpers’s main example, Velázquez’s Las Meninas, the two modes are intertwined, but for simplicity’s sake let’s assume here that as a rule, either one mode or the other is employed in any given picture. I’ll contrast the two modes of representation with each other by using two older manga as examples, Barefoot Gen by Keiji Nakazawa, and Haine by Kyōta Kita and Keiko Ogata.

Let’s stark with the more obscure one,  ハイネ: 愛と革命の詩人 / Haine: ai to kakumei no shijin (“Heine: poet of love and revolution”, published in German as Heine in Japan in 1988). It is the biography of the German poet Heinrich Heine (1797 – 1856), who actually had never been to Japan. In these two panels from p. 35, we see the young Heine in conversation with his aunt and uncle. The figures in the top panel look orthogonally out of the picture so that we, the readers, feel as if they were looking at us, and as if we’d look through Heine’s eyes. In the bottom panel, the arrangement of the figures makes us imagine we stand right next to Heine’s aunt, as if we were a fourth family member taking part in the conversation. Both panels are clearly composed in the Albertian mode of representation, as they give the impression of a plausible human point of view. This mode is predominant throughout the comic. 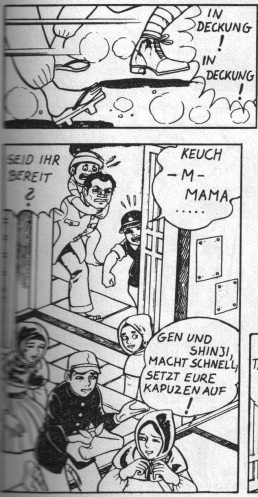 In contrast, consider these two panels from the beginning of the classic Barefoot Gen (はだしのゲン / Hadashi no Gen), on p. 3 of the German one-volume edition from 1982. The top panel shows running feet, seen from slightly above ground level. On the bottom panel, we see the Nakaoka family fleeing into an air raid shelter, depicted from a slanted view from above. What these two points of view have in common is that they can hardly be said to show the action from a human perspective: it is unlikely that a figure within the story could perceive things from the same position as we, the readers, do. Therefore, we can say the descriptive mode is employed here. Particularly the oblique and elevated point of view of the bottom panel is a frequent device in Barefoot Gen to freshen up traditional “shot/reverse shot” dialogue scenes.

Our analysis of the modes of representation shows that in each of the two comics, a mode is chosen that complements it: Barefoot Gen is based on its author’s personal experiences, but in order to show that the horrible events depicted in this comic are neither purely fictitious nor singular, the descriptive mode of representation is used to make them less personal and more credible. In Haine, on the other hand, the Albertian mode is used as an invigorating device that puts the reader into the action and almost turns this second-hand account into an eyewitness account, thus bridging the gap of 150 years between our time and Heine’s.

3 Comments on “Svetlana Alpers’s modes of representation – in comics?”