← Not a conference report: some notes on ComFor 2012
Before Watchmen roundup, part 1 →

A rose is a rose: flower photography by Luzia Simons and Sarah Jones

The poster (PDF) advertising the exhibition “Lost Paradise: Blumenbilder in der Fotografie der Gegenwart” (“Flower pictures of contemporary photography”, Mönchehaus Museum Goslar, 11.8.-23.9.2012) shows an arrangement of flowers in front of a black background. Now if that isn’t by Sarah Jones, I thought. Jones’s series The Rose Garden (or Gardens) is exactly that: brightly lit rose bushes standing out against an impenetrable darkness. When I learned that the photograph used for the poster was by one Luzia Simons instead, I was even more intrigued to go to Goslar to see the show, amazed that two different but contemporary photographers could come up with such similar pictures.

Of course, flower still lives with black backgrounds have a long tradition – in oil painting. Simply recreating such paintings in the medium of photography isn’t what Jones does either: her roses are not arranged in vases or on tables, but blossom on living shrubs, which she encounters in public parks, apparently. In the Goslar exhibition, where six works from Simons’s Stockage series are displayed, it becomes clear that her approach is different from both the old masters and Jones. Simons doesn’t just shoot photographs but makes scanograms: she places cut flowers (tulips, not roses, by the way) on the glass of a customized scanner, which then produces a digital image of them. 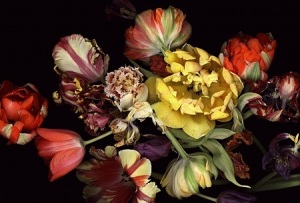 One of the results is the luminosity of the flowers in contrast to the completely black background, just as in Jones’s works. Other effects mark a clear difference: you can see where pollen has fallen on the glass plate, petals and leaves bend against it, and the arrangement of the flowers is unlike that in a bouquet or shrub; they seem to grow into the picture from all directions, leaving the beholder puzzled about whether the laws of gravity are still in effect here.

Both Luzia Simons and Sarah Jones draw attention to their respective production process. They make the beholder wonder how they could achieve this contrast in lighting, and at the same time they manage to create beautiful pictures. The “Lost Paradise” show (which Jones isn’t part of, unfortunately) is an impressive proof that flower still life is a genre of surprising timeliness.

2 Comments on “A rose is a rose: flower photography by Luzia Simons and Sarah Jones”