← Astonishing X-Men is a gay soap opera (and that’s a good thing)
Daisy Yamada’s Boyfriend and the purported superficiality of Japanese pop culture (review of vol. 1-3) →

Comics will be part of documenta when hell freezes over. However, there are some works at this year’s documenta (Kassel, June 9 – September 16) that come quite close to the McCloudian definition of comics. The following list is just a personal selection and by no means meant to be exhaustive. 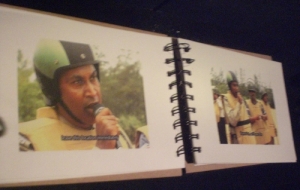 The very first work I’ve seen at documenta could actually be called a comic, sort of. In the Ottoneum, Amar Kanwar has several books (and other things) on display. One of them, Photo Album 1: The Lying Down Protest, documents a protest action in India through a series of photographs, sometimes with captions added. There is one photo on each page, on both sides of the leaf, resulting in a layout similar to that of Martin tom Dieck’s hundert Ansichten der Speicherstadt (cf. my essay).

For an exhibition of contemporary art, there is a lot of old art to be seen, e.g. a sizeable collection of abstract drawings from the 1940s and 50s by Gustav Metzger in the Documenta-Halle. Some of these drawings are arranged like comic panels, i.e. in different sizes, with clear borders, on the same sheet of paper. Are these drawings meant as independent sketches which Metzger placed closely together on the sheet only to save paper? Or is there a relation between adjacent drawings, maybe even an intended sequence?
Another example of a not-quite-contemporary exhibit is Charlotte Salomon’s widely publicized Leben? Oder Theater?

Khadim Ali‘s four-part painting The Haunted Lotus in the Neue Galerie is reminiscent in style of traditional East Asian religious paintings, but at the same time the framing makes it look like a panel sequence in a comic: the continuous background evokes a “tracking shot” from left to right or vice versa, so that each of the four parts can be seen as one point in a chronological sequence. The figures in the foreground remain largely the same in all four parts of the painting, thus giving the impression that some figures move between the “panels” while others stand still. Another comic-like feature is the writing next to the figures’ heads.

Then there’s Nedko Solakov at the Brothers Grimm Museum. Among many other works, some drawings are shown in several display cases. Their arrangement in two horizontal lines suggests a sequential relation between them, but although each drawing has a handwritten caption text on it, it’s hard to make out any order in which they could form a narrative. Still, the surrounding works by Solakov strongly suggest a narrative reading, since they are all about his dreams and fantasies of medieval knights in shiny armours.

All in all, while not completely absent, sequential art is sadly underrepresented at documenta (13). Unfortunately, the exhibition of comical art, Caricatura VI, which is on in Kassel at the same time, doesn’t show many comics either, although it contains cartoons by comic artists such as Guido Sieber, Harm Bengen or Nicolas Mahler.

2 Comments on “Sequential art at documenta (13)”